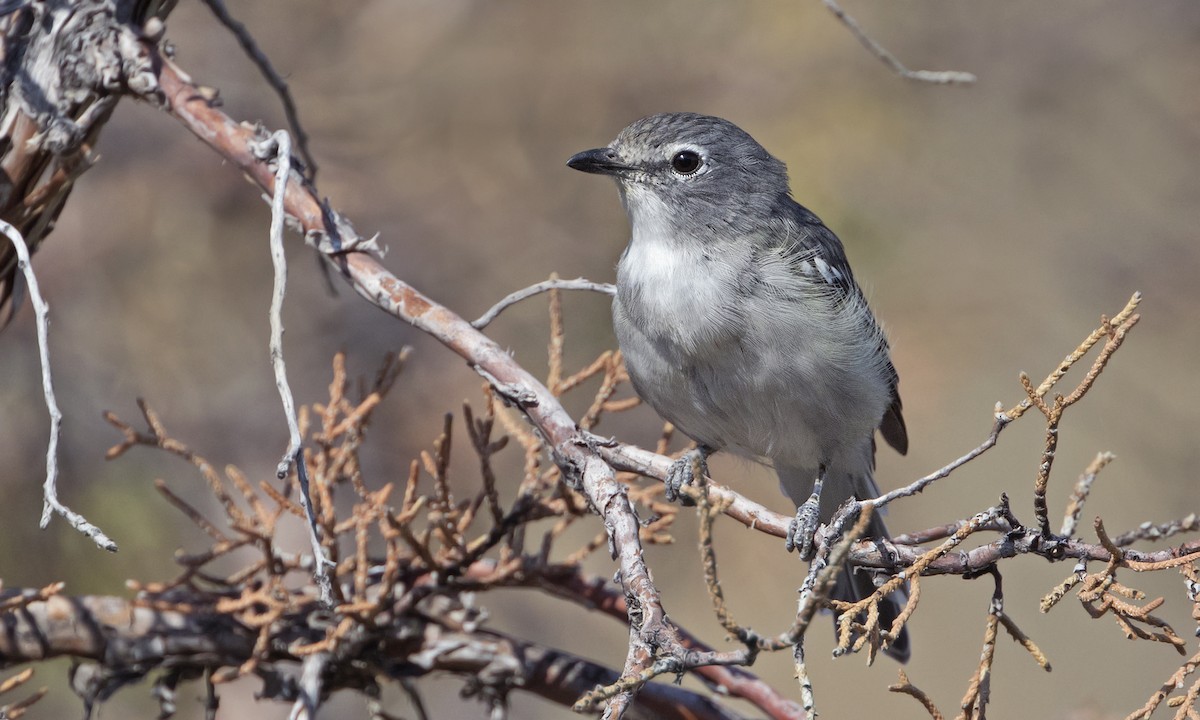 Zak Pohlen Media from this contributor

This vireo clearly falls within the Solitary vireo complex, and Blue-headed can be safely ruled out based on lack of vibrant yellows on sides of breast and flanks, lack of greenish coloration on back, and no yellowish-green on the edges of flight feathers or retrices. The more difficult separation falls on the intermediate species between Plumbeous and Blue-headed, the Cassin’s Vireo, and especially on dull individuals were overlap in song and plumage is known to occur with Plumbeous Vireo. Overall, this bird lacks the greenish or yellowish colors or washes on the back, coverts, flight feathers, retrices, and flanks of a Cassin’s Vireo in all lighting situations (harsh bright light and shadows). Only faint yellowish wash appears on the lower rump and lower flanks where it is expected on Plumbeous Vireo, and especially on fresh body feathers like this one has. The overal smooth and not fuzzy/spiky appearance of the head and back, as well as most of the underpart feathers being uniform and fluffy without broken barbs indicate that this bird has completed most of its pre-basic body molt. Therefore, the colors in the flanks and back are true, and are not a result of wear or fading as you would see on a spring/summer bird, where dull worn Cassin’s Vireo look like Plumbeous Vireos. The strong facial pattern of this bird with the stark white eyering, throat, and underparts contrasting with the gray upperparts are also indicative of Plumbeous Vireo compared to the more muted appearance and less striking demarcation of head and throat that is seen on Cassin’s Vireo. Finally, the lower pitch of this bird’s song was consistent throughout all phrases of its singing bouts, and lower than any Cassin’s Vireo I have heard. Many authorities find identification in the field by song for these two species useless, and I recognize these limitations. However, analyzing long multi-phrase recordings can be useful, especially when coupling with plumage characteristics. Recordings were sent to Ed Pandolfino who calculated the average mid-point pitch of the song phrases to compare to known Cassin’s and Plumbeous Vireo recordings. His findings reveal this bird fell below the lower 95% confidence limit of Cassin’s Vireo frequencies, but in the upper range of Plumbeous Vireo frequencies. This is not definitive, but is highly suggestive of Plumbeous Vireo rather than Cassin’s Vireo. Given the overlap in plumage and audio of Cassin’s and Plumbeous Vireos, combinations of these characteristics are required to confidently eliminate one species. In summary, this individual has all its plumage characteristics on fresh, unworn, basic feathers, and an unbiased analysis of the pitch of its song all indicating Plumbeous Vireo.