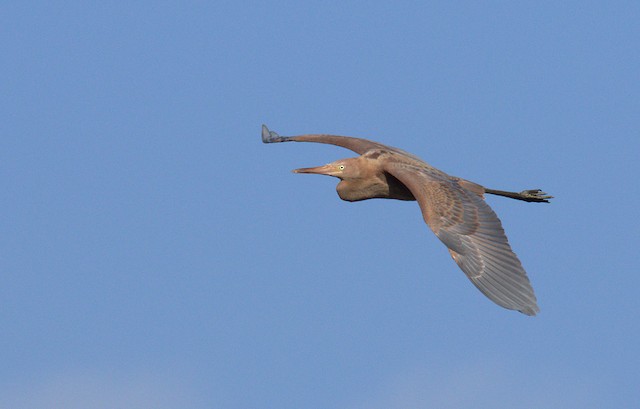 This juvenile Reddish Egret was found earlier in the day by Larry Ballard and photographed here by Curtis A. Marantz on 29 July 2017 at the Carpinteria Salt Marsh Reserve, Carpinteria, Santa Barbara County, California.

We were present for quite some time before Larry spotted the continuing egret foraging in the lagoon where it had been obviously absent for the previous half-hour. Moreover, even after we spotted this bird, it moved about quite a bit, and within a minute or two it flew out toward the beach before circling around and dropping into the middle of the marsh well to our north. Given that this bird was strongly backlit when in the lagoon and quite distant after it landed in the marsh, my best views of it were obtained when it flew almost directly overhead on its return from the beach and before dropping into the marsh. Typical of this species, this bird danced about actively when in the lagoon, but we were unable to see much of its behavior once it was in the marsh. As is typical for this species, this bird was silent. This was a medium-sized heron that appeared to be a little larger than the Snowy Egrets we had been seeing, albeit none in direct comparison with this bird. I was able to note a dagger-like bill that was about twice as long as the head was wide, a slim and relatively small head that sat atop a slim neck that had the typical “S-curve” of a heron’s neck, and a plump body with an upright posture, short wings, and a short tail. The legs were notably long and slim. When seen in flight, this bird held the bill straight forward, retracted its neck, and it flew with deep wing-beats on rounded wings with the legs held straight backward and extending well beyond the short tail. I suspect this was the same individual that I had seen in Malibu on 21 July, given that it was unusually rufescent for even a juvenile of this species, but because my best views of the bird were when it was in flight, I was unable to discern many of the finer details that I saw clearly on the Malibu bird. As far as I could determine, the head, neck, and underparts were uniformly brick-red. My views of the upperparts were not as good as those of the underparts, given that this bird was best seen when it flew overhead, but my impression was that the back and upperwing coverts were likewise quite rufescent and without obvious pattern. I was however able to see when this bird flew by that the remiges were medium-gray, albeit with rufous fringes that created a striped pattern to the outer and trailing parts of the open wing, but I cannot recall clearly seeing the tail. A bit atypical for even juveniles of this species, this bird had the bill almost entirely a bright, orangey-flesh in color with only a bit of darker smudging on the distal part of the upper mandible, something that it shared with the Malibu bird. The eyes were pale, but I was unable to discern whether they were white, yellow, or cream-colored, and I can say little more about the legs than that they appeared quite dark, likely either slate-gray or blackish, and without obvious contrast between the legs and feet.