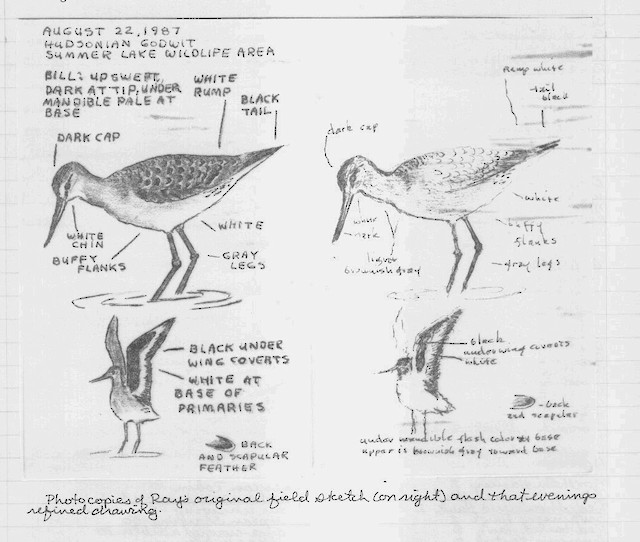 The great surprise of the day was the juv. Hudsonian Godwit with the Marbled Godwits at Summer Lake W.M.A. They were east of Bullgate dike on the main refuge road. The Hudsonian Godwit was much obviously smaller than the Marbleds. It had a definite godwit shaped bill long and slightly upswept. The bill was also two-toned. The lower mandible was flesh colored at the base half way to the tip. The upper mandible was only flesh colored at its base. The crown was dark giving a capped appearance to the bird. There was an obvious white eyestripe between the bill and over the eye - not extending past the eye though. There was a dark eyeline extending past the eye. The chin was white. The back and scapular feathers were black centered with buff fringes, typical of juv. plumage. The wing coverts were grayer lending to a contrast with the scapulars. The rump (uppertail coverts) were white and contrasted sharply with the black tail. The neck was grayish-buff becoming brighter buff on the breast and sides. The flanks were white with some dark streaking. From the legs back to the undertail coverts was white. The legs were dark gray. Although we watched the bird for a full hour (1010-1110) we never saw it fly. It constantly fed and on a few occasions it would raise its wings over its back giving us good views of the underwing. All the underwing coverts and axillars were black. The primaries and secondaries were dark with a wide white base. This was very striking and stood out even to the unaided eye. Ray Ekstrom did an excellent field sketch and later refined it (see below). The sketch though does not show the contrast between the buffy scapulars and grayer wing coverts. This contrast is pictured well in the drawing of the juvenile in the book Shorebirds, Hayman, Marchant and Prater. The overall coloring and pattern shown in this drawing was much like our bird. The bird was 75-150 ft. away