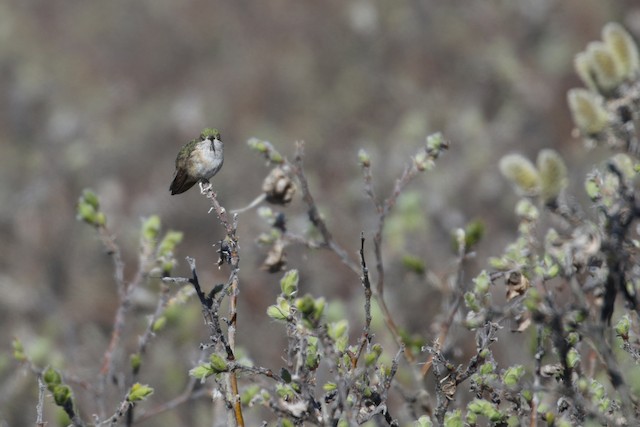 This photo nicely shows the white line in the lore.

I discovered this Calliope Hummingbird on my regular morning survey of East Ice Creek near Simpson Point on Herschel Island. I first spotted the bird very briefly as it darted low to the ground in a fairly extensive dense patch of knee-high willows (Salix richardsonii). Over the next 15 minutes I saw the bird just 3 times and only for a few seconds, but it's extremely small size and colouration (green back, pale buffy front) immediately brought to mind Calliope Hummingbird. It flew only 10 cm above the ground, and was extremely hard to spot in the myriad willows. I made the decision to run back to camp and get my hummingbird feeder (yes, I brought a hummingbird feeder to the Arctic). The return trip to get the feeder took about 35 minutes, I put the feeder up and waited for about 10 minutes. Then by chance I looked over my shoulder and saw the hummer perched about 25 metres away. I got a great view and my first photo!! Then miraculously, the hummer did a fly by and circled right around me; seconds later it perched on top of a willow about 3 metres away. This time I got a very good view of the bird in excellent lighting, and got some pretty good photos. Then the hummer vanished again into the willows. I waited about 10 minutes, and then quietly moved position to scan the willows. And there it was, just about 2 metres away, but well hidden in the willows. I got great views and took the best photos I could through the foliage, and they do show detail. The bird flew from the willows, and then appeared to be feeding on willow flowers for a few moments. Then it disappeared again. I waited about 45 minutes and did not see it. The hummer never went to the feeder. I returned there on the morning survey each day until 22 June and did not see the hummer again. It was an extremely small hummingbird, that I likened to 2x bigger than the big bumblebees that are common on the island -- though it was likely somewhat bigger than that. It had a short slightly curved black bill. It had a bright green back, nape and crown, and relatively pale greenish-grey ear coverts. I could see the little white line in the lore that appeared like a white notch when viewed face on. It had a little white spot behind the black eye. Its undersides were a very pale washed buff and whiter at the belly, not bright or more intense rufous like a RUHU. It's throat was pale greyish-white with short streaks, and a very small central spot on the lower throat. The tail appeared black with little white tips visible; and the wing tips extended just beyond the tail. All these features are shown in the various photos, and document this as the first record of Calliope Hummingbird for the Yukon and the Western Arctic / Beaufort Sea region. Sheri L. Williamson had a look at the photos said that the lack of pale fringes on the body plumage (suggestive of a juvenile) indicates that this bird is an adult female.