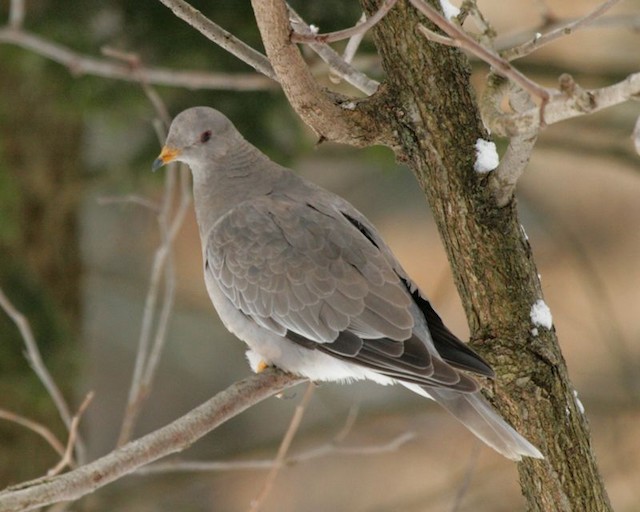 Original observers: Joan, Al, and Sarah Sinclair. First record for Muskoka. Source: Al Sinclair pers. comm. 2012 At 10:00 a.m. on 4 February 2012, Joan Sinclair noticed a large, unusual looking pigeon at a feeder on her property near Uffington, 8 km east of Bracebridge. Al Sinclair identified it as a Band-tailed Pigeon. He phoned several local birders and posted a photo of the bird on the Muskoka Bird Board, and got word out on Ontbirds. Janice House and Regan and David Goodyear saw it in the early afternoon, as it sat in the open near the feeder and made occasional flights down to feed. At 2:00 p.m. it flew into a large hemlock at the side of the Sinclair’s yard. The Sinclairs couldn’t see it, but didn’t want to scare it away by attempting to locate it. Unfortunately for Guelph resident Josh Vandermeulen, who was doing an Ontario Big Year, and several other out of town birders who made the journey to Bracebridge, the bird did not make a reappearance the rest of the day. Over the next two days, however, this rarity did not disappoint. Some 50 birders from Toronto, Guelph, Lindsay, and even areas as far flung as Long Point, were able to get good views of the bird as it cooperated by spending large parts of the day in full view, resting on branches for up to 4 hours at a time after filling up at the feeder. It was identified as a juvenile bird, and a brown-un-molted juvenile tail feather was clearly visible, as were pale-edged juvenile feathers on its back. As a juvenile bird it also lacked the white crescent on the nape that is a diagnostic feature of an adult bird. It was seen to eat snow frequently from branches, because as a seed eater it requires water to aid with digestion (Iron 2012). Al Sinclair noted that the bird appeared brighter and was moving around more on 6 February, and the bird was last seen at 2:45 when it flew into a group of hemlocks (MBB 4 – 6 February 2012; Sinclair pers. comm. 2012). Josh Vandermeulen got the bird when he returned to Bracebridge on 5 February – species number 129 of what would ultimately prove to be a new record-setting Ontario Big Year total of 344 species (Vandermeulen 2012). 11 Ontario records of Band-tailed Pigeon have been previously accepted by the OBRC (as of July 2013) and the Muskoka sighting was the first record of this species in the province in nearly a decade, the last one being a bird in London, November through December 2003 (OBRC 2014). Five of the Ontario records are from northern Ontario, with the other 6 from southern Ontario. One of these records was from Dillon Cove, Parry Sound District in September 1994. Nine of the records occurred between August and December, and the other two were spring records between April and May.