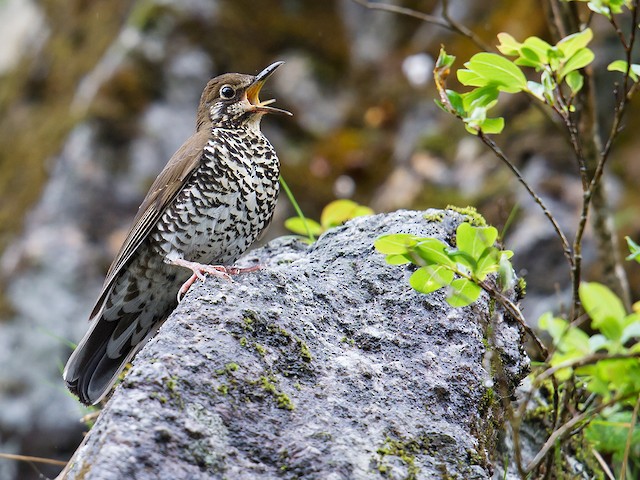 1 on Dúlóng side of Salween-Irrawaddy Divide (3380 m) Today, a week after meeting Per Alström and his partners, my team was back at the Salween-Irrawaddy Divide. I was mindful of Per’s desire to get “natural” images of a “Plain-backed Thrush.” During a rare break in the rain, I stepped out and played the song Per had transferred to me on 13 June. After a few minutes, a “Plain-backed Thrush” called back. The thrush perched just 15 m from me, singing powerfully. What a rush! I took dozens of photos and made three good recordings. Afterward, I texted Per: “We got your thrush! This morning, my team was on the Gòngshān-Dúlóng Road, on the Dúlóng side of the Hēipǔ (黑普) Tunnel (the high tunnel), just up the road from where our teams ran into each other. Rain was falling steadily, & there was much fog. During a break in the rain, I stepped out of the car and walked downhill, playing the recording that you shared with me. Within seconds, a hearty response. Then the rain started falling very hard, and the fog grew thick, and I had to run back to the Captiva. Half an hour later, there was another break in the weather, & I tried again. After a few minutes, my jaw dropped: a ‘Plain-backed Thrush’! The bird was singing powerfully in response to the recording. For 15 minutes, the thrush did circles around me, circles that as the bird grew used to me were getting tighter and tighter. The thrush perched just 15 m from me. I whipped out my pocket recorder and made 3 good recordings.