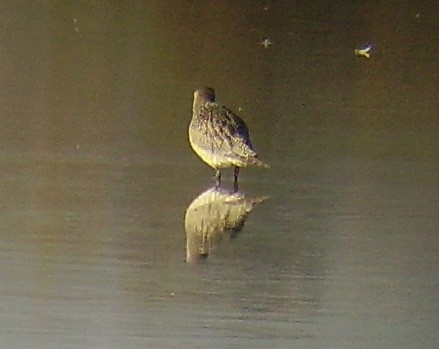 Nick Lethaby found this bird during the early afternoon, and I went to look for it a short time later. I found it in the middle of the slough, with a flock of more than 100 Black-bellied Plovers. I watched it for about a half an hour, from 50–70 meters, with the afternoon sun shining from off to the left. I watched the bird with a 20 x 60 lens in my scope, under what I considered very good viewing conditions. Size/structure: Next to the Black-bellieds, this bird was noticeably smaller, slightly more than midway in size between the Black-bellieds and nearby Dunlin. The bill was much smaller than those of the Black-bellieds, in both length and depth. My feeling was that the bill was shorter than I’ve seen on any Pacific. Leg length was difficult to gauge, since the bird was in the water the entire time. The wings projected well beyond the tertials and tail. When the wings were folded, the tips of the wings lay about as far beyond the tip of the tail as the tip of the tail projected beyond the tips of the tertials. I consistently counted four primaries projecting beyond the tertials, with the tip of another primary more or less even with tips of the tertials. The outermost primary barely projected beyond the primary next to it, but it was not hard to make out, since all the primaries had noticeable pale edges around the tips. The tips of the primaries crossed beyond the tail when the bird was at rest. Plumage: The bird’s plumage was fairly dull overall (certainly compared with some juvenile Pacifics I’ve seen), but not as dull as some juvenile American Golden-Plovers I’ve seen. The crown was darker and had brighter yellow spangling when compared with the mantle. However, the yellow spangling on the mantle was still quite noticeable. The wing coverts were duller than the mantle, nape, and crown, and I’m not even certain I could make out any yellow here. Contrasting with the dark crown was an obvious whitish supercilium. The white of the super wasn’t as bright as I’ve seen on some other Americans, or as bright as on adults of either American or Pacific. However, it was clearly white, not the buffy yellow of a juvenile Pacific. Otherwise, the face was grayish, with an indistinct dark spot behind the eye. This spot was not as dark as I’ve seen on some Pacifics. The underparts were pale, but next to the Black-bellieds appeared to have a vague brownish gray cast. Some darker brownish spots were neatly arranged on the sides of the upper breast. On the flanks, the bird had some duller, less distinct dark smudging. When the bird flew, I could see that the axillars were roughly the same color as underside of the body (they showed no trace of black) and that the tail looked solidly brown above. Bare part coloration: The eyes were black. The bill and legs were more or less black.