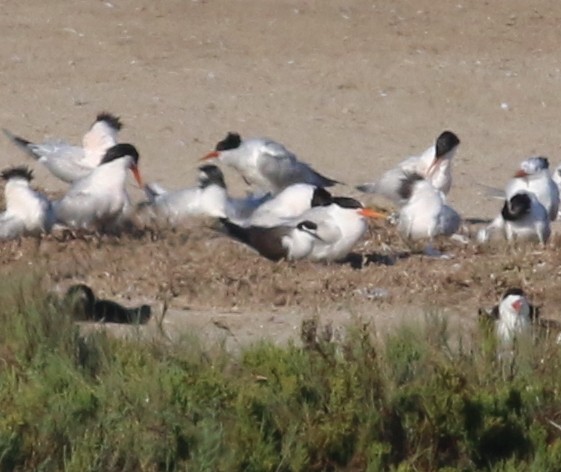 Initially found by Tom Ford-Hutchinson and Jeff Bray approximately 5:35 PM. It spent the majority of its time either perched on or flying over the tern nesting island, with brief forays over the bay. Most easily viewed from PCH, from where it is only 200-250 meters to the island, versus 500 meters from the footbridge. A scope is helpful. This was a relatively small tern, notably smaller than the many Elegant Terns nearby, and generally similar in size to a Forster’s Tern, which were also present but I never noted in direct comparison. It was generally characterized by having dark upper parts and white under parts. The crown was jet black, extending onto the nape where it tapered to a point, and connecting to a narrow black eye line extending from the bill through the eye. The black of the eye line and crown were separated by a narrow white supercilia that connected across the forehead, and appeared to extend back above the eye. The back and upper wing coverts were dark gray, contrasting with and being noticeably paler than the black remiges. The gray of the upper parts became somewhat paler on the upper back, and sort of faded into the white collar that separated it from the black crown. The upper tail was mostly dark but with white outer edges (I’m not sure if I noted this in the field or only in the photos). The under parts were white, including the under wing coverts and the bases of the remiges (again, I do not recall noting the extent of white in the under wings in the field, though it is apparent in the photos). The bill was relatively short, slender, and black, and the eyes were dark. The feet appeared blackish as well in my photos. This bird was quite graceful in flight, being rather buoyant and having rather shallow wing beats. It did not tend to fly very high, and was usually within a few meters of the island or water’s surface. While perched on the island, it was rather aggressive toward Elegant Terns that got too close, either pecking at them or lunging or charging at them to get them to move. Otherwise it tended to sit in what appeared to be very short, dead vegetation on the island. I did not observe it foraging, nor did I hear it vocalize. This bird’s plumage is most consistent with that of an adult Bridled Tern (versus Sooty or Spectacled Tern), and its timing falls within the May-August window of California’s three previously accepted records, including one at Bolsa Chica 17 Jul 1998 (CBRC #1998-105) and 10 Jul 1999 (CBRC #2000-063).