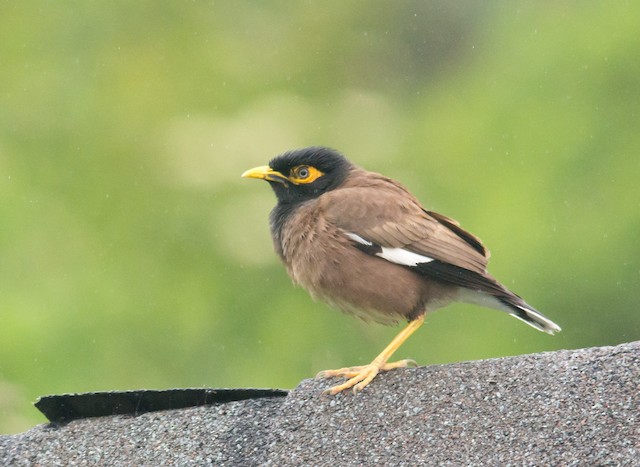 I saw this bird briefly on 1 July 2013 and wasn't able to ID it then. The next day, Ronnie d'Entremont was able to get photos and it was identified as a Common Myna. This bird was last seen on 11 Jul 2013. This bird is not officially countable on the ABA checklist for NS. Another Common Myna was found on 17 June 2013 at Seal Cove, Grand Manan Island, NB. A very important point was raised by Edward S. Brinkley in The Changing Seasons, North American Birds, Vol. 67 No. 4. He commented on the dangers of shrugging off these uncountable birds as likely being escaped from captivity. We don't have proof of either an escaped bird or a bird that made its way to NS from the s. Florida population (likely on a ship). If it is determined with certainty that Common Mynas can occur in NS from the Florida population, we would benefit from historical detailed records like this one. Multiple observers saw this Common Myna checking the dog dish. This behavior is also demonstrated by birds from the s. Florida population. I assume that this record will not be passed by the eBird validators, but it will still be found in my personal species list and if it is added to the provincial checklist, then it could be revisited. Otherwise, keeping track of such sightings is important in any case.