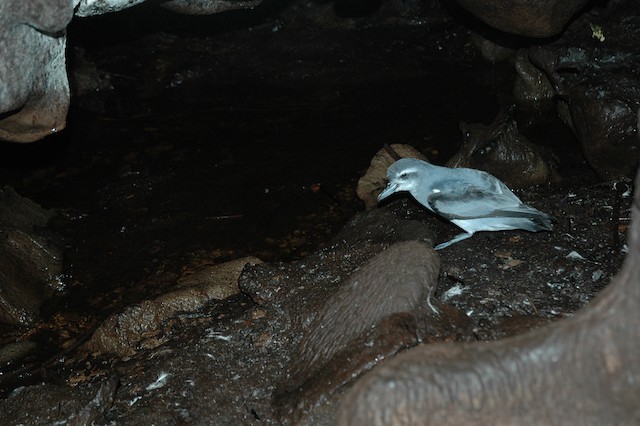 At the time I visited Gough Island I called all the prions on land broad-billed prions, as was the custom for birders before me as well. Subsequently, Peter Ryan and coworkers found that there were two ‘bill morphs’ of the broad-billed prions on Gough (see https://link.springer.com/article/10.1007/s00300-014-1473-2, see also http://www.hbw.com/news/new-prion-gough-island). In this paper they commented on how similar the ‘blue-billed’ morphs were to Salvins/MacGillivray's, but didn’t go a far as to call them that. In subsequent publications, these were called as such (e.g. https://doi.org/10.1017/S0954102015000279). The photos pictured here were taken at ‘prion cave’, where these Salvins/MacGillivray's prions were ‘discovered’. While I did not measure the bills of these birds, it is evidently blue, as noted in the description. For anyone who knows prions, this is a hard group of birds. The fact that there are no MacGillivray prions reported from the area in the past is not a reflection of their rarity - there is an estimated 500,000 pairs on Gough. It would thus behoove future birders to the area to give these birds another look. I’ve also added photos of a dark-billed broad-billed prion to another list for comparison (http://ebird.org/ebird/view/checklist/S35261901).