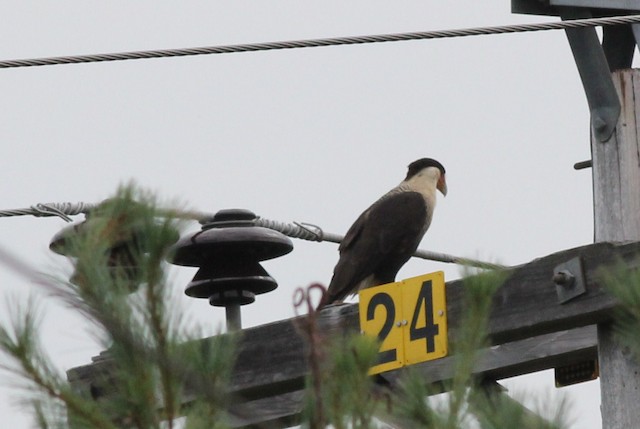 We arrived to find this this striking bird perched on cross bar of utility pole. It had landed here within a minute or two of our arrival. After fifteen minutes It flew west down the utility clear-cut. A medium-large raptor about the size of a Common Raven but longer-legged and with a powerful, hooked beak that had a dark orangish-red cere across its base. There was a short, swept-back black crest over a white face and neck. On the perched bird, the upperparts and underparts appeared solidly brown-black (I could not discerne any fine patterning at the distance we saw the bird). The white of the neck end abruptly in a curving line across the lower breast. A well-defined whitish back formed a triangle on the upper back. Both the lower breast, lower neck, and lower back were finely barred with black. The tail was white basally (4/5?) with a broad black band across the tip. The beak was gray to dark bluish-gray. I could not determine eye color, but I thought it might be dull reddish or paler than solidly dark. The legs were orange and quite long. The bird clearly lacked any bands or jesses on its legs. In flight, there were prominent white areas at the base of the outer primaries and across the rump (white continuous with base of tail). Given the distance, I could not see any pattern in these areas, but I did note that 2-3 outer primaries were old and new, in-growing primaries inward of that gave the wing a ragged profile. The flight style was stiff on rapid, shallow wingbeats. This bird was found yesterday by Steve Muise and his wife. Steve recognized the bird as odd and identified it correctly himself. He then alerted several people in Maine. He has submitted a written description and photos to the Maine Bird Records Committee. ***This would be a first record for the state of Maine and perhaps the second for New England. What was probably a single individual was seen at several localities in Nova Scotia last year (March onward through summer) and into early this year (through January 2014?). I do not know the last sighting of that bird, and it is conceivable this is the same individual. Sightings at widespread localities in California were determined to involve some of the same birds based on plumage patterns (remiges barring etc.). There was a Crested Caracara in Massachusetts about 10 years ago, and another has been seen in New Jersey in the recent past.