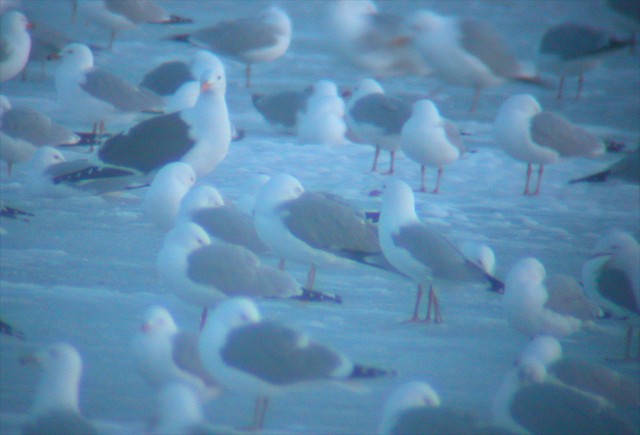 This image also by Scott Wilson provides views of the smaller oval head and bright orange bill and the longer neck plus the narrow white drooping skirt.

This pristine alternate adult was first scoped on the Wascana Marsh ice to the west of the then Center of the Arts (Conexus Center) and south of the Waterfowl Display Pond. It was with a smaller number of newly arrived California Gulls. It caught my attention because of its larger size and darker mantle than the CAGU's. It had a smaller dark eye within a proportionately smaller oval head on a longer neck. The longer bill was bright 'school bus' orange with a significant bulge at the gonys. It also had a red spot on either side of the gonys. The dark eyes suggest that this bird was of the Northern Subspecies or accidentalis. The pink legs were also longer and appeared thinner. The primaries were dark except for a single oval mirror on p. 10 of each wing. This bird had a 'drooping skirt' which was much less obvious than a Slaty backed Gull. As mentioned the identity was confirmed by California Gull Expert Steve Hampton after he was sent three images captured by Scott Wilson on the last day of its appearance on 07 April. Several other local birders including Dan Sawatzky saw this bird over the interval it remained.