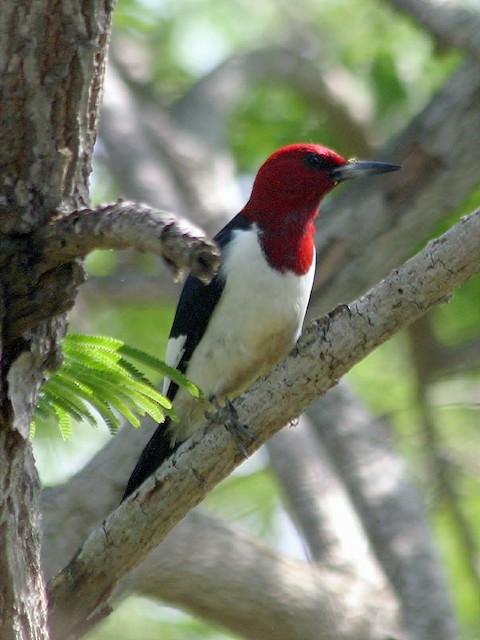 This species, when it sits handsomely upright displaying its namesake head, as here, is an irresistable invitation to photograpy. I did not resist the temptation! Even getting this somewhat shadowed photo of that pose by this dramatically patterned red, white, and black bird was highly gratifying.

This Red-headed Woodpecker used several of the trees directly behind the Convention Center. I had no trouble getting photos of it, although, in accord with its reputaton as a high-activity creature, it frequently moved often from branch to branch and tree to tree in search of food, of which it appeared to relish a variety of kinds (see Photo ML49907591). It had been in the area for some days, as reported by others. Because of the late-day character of our visit, the sun was on the bay (west) wide of the woodpecker wherever it landed, and the trees it favored tended to be those directly east of a marshy area that was behind them. It would not, therefore, have been easy in principle to get to the west side of the bird for unshadowed photos. Also, in any effort to get to the west side of this bird (i.e., adjacent to the marsh), I would have had to walk close to it as it foraged in a tree. Thus, any effort to do so potentially could have disturbed its efforts to feed and probably would have flushed it. It would be better, I thought, to have somewhat shadowed images than to interfere with its effots to feed. PLEASE NOTE: This species, unlike many woodpecker species, does not display field-visible differences in the sexes. For this reason, I was unable to declare the sex of this individual despite having close looks and getting close (telephoto) photos.