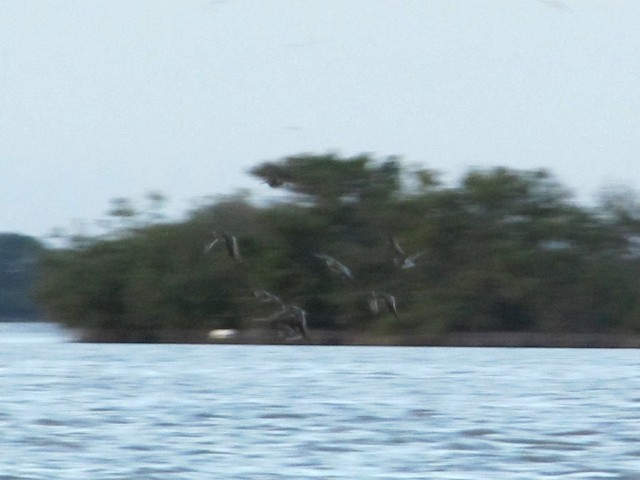 The main pitfall for ID'ing out of range Long-billed Dowitchers would be seeing Short-billeds, and hearing something in the background that sounds like Long-billeds but actually isn't coming from the dowitchers at all. While poor quality, this photo clearly shows that we saw dowitchers. They flew right in front of the canoe and at least two of them were making sharp "keek" calls typical of Long-billed. No Short-billed vocalizations were heard.

First I heard a few loud "keek" calls and exclaimed that it was a Long-billed Dowitcher. Over the next few minutes we continued to hear what sounded like at least a couple LBDO amongst a congregation of egrets and large shorebirds on the shoreline as we went by in the canoe. Finally we had a flock of a few dowitchers lift off and fly a few meters in front of the boat. See photo. At least two but maybe more were LBDO based on the sharp "keek" calls. I never heard a SBDO but that doesn't mean there weren't any. Sometimes other shorebirds, even stilts, can vaguely sound like LBDO but the calls were perfect for LBDO, not to mention that the flock was clearly 100% dowitchers (see photo). Experienced with dowitcher ID and calls. We were aware that LBDO is very rare here (though surely often overlooked) - the ID was made very carefully and these notes were made the day of the observation. LBDO often feed on coastal flats, at least in Oregon where we are from. They often are way more vocal than SBDO and a flock of dows often contains many quiet SB and a couple noisy LB. So I'm assuming most of the Dows were Short-billeds but have left them as dowitcher sp.