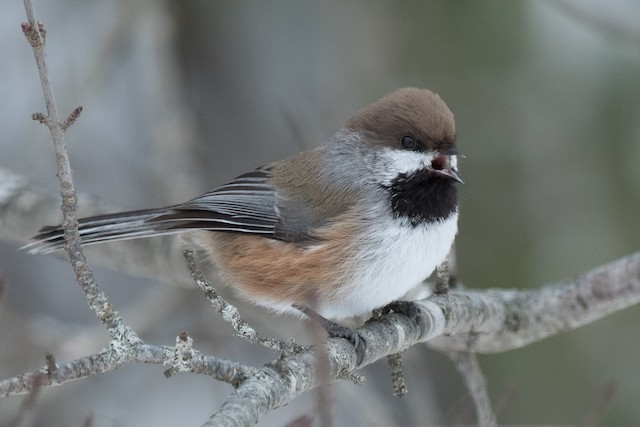 Arrived with Black-caps, small triangle of white in fore-cheeks unlike broad white cheek of Black-caps. Crown brown, bib black and abbreviated (shorter) than Black-caps. Back dark brown; flanks with orange-brown. Lower, husky calls. Eye dark. This is my second Boreal Chickadee in Kennebec county, the first having been in Sidney on a Waterville CBC (14 December 2008). That bird was found after doggedly searching for the species all day. That was the only time I have tried to see if a Boreal Chickadee could be found in winter here. The count had one previous record for 19 December 1993. I suspect a few occur almost annually in or near conifer patches in winter throughout this region, which is outside their breeding range, and they might be more routine in the region compared to the species' irregular occurrences to s. New England, for example. Some of those movements involve birds that appear to return to the same sites several winters consecutively.