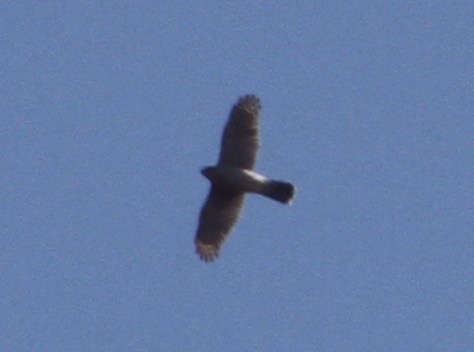 Not an ID to take lightly. The first rule of thumb for Goshawk identification was fulfilled with this observation, upon first observation my immediate thought was Goshawk, not wondering whether it was Cooper's or Gos. When first seen bird was flying near Red-tailed Hawk and the size matched that of Red-tail, which helped clueing in to identification. Bird made several passes and allowed for photo opportunities. The crop of the bird was not full, so body size shown in photos is natural. Body shows no taper and is very broad. No tail pinch at base with Accipiter length tail, but does not appear as long proportionally as the tail of a Cooper's would. Also width of wings from lead to trailing edge is the same as the tail length. I measured it from the photo. Wings also very broad in first photo. Head large but does not project as far proportionally as a Cooper's would. In glide, the wings seemed like a falcon's. Long wings, with long primaries showing a pointed tip. There is an obvious bulge on the trailing edge and a nice carpal projection. Wings also appear droopy. Asked others to aid in ID confirmation and they agreed Goshawk was a match based off the photos. Field observations all signaled Goshawk.