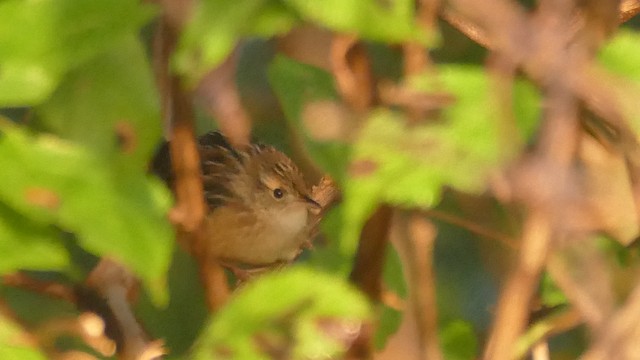 I had thought I heard movement as i was walking along the field edge trail around the boat launch, but I attributed it to dripping morning dew. I was looking for a Shrike that had been reported here, so I played a call note to myself so I could listen for it, and as soon as I did a bird flushed from the riparian side of the path. I had only played a single call note, as I stopped it as soon as I saw this bird. It was tiny and plump, so I immediately thought sparrow, or warbler. Then I saw the plain face, long bill, and short tail, and knew it was a wren. It then hopped into direct view for a few seconds. Sedge Wren! It lacked the buffy wing patch of a MAWR. It continued to give me brief views so I tried to photograph it, but had to rely on manual focus through branches. Still, better looks than I’ve had before! Photos and audio. I did not phish it either. Very cooperative.