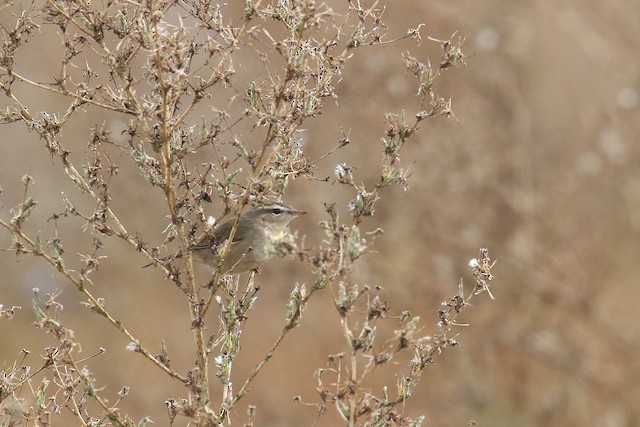 After failing to see this bird the day before, today it was remarkably cooperative, staying in small area for well over 30 minutes and providing reasonably good views. When I arrived the bird was still present at the end of Channel Drive. A small phyllo that was brownish above from crown to tail, with unmarked wings. Primary projection was not long, but was difficult to assess since it usually stayed buried in or behind vegetation. It was pale below from chin to under tail covert, appearing dull whitish on the throat but dulling to pale grayish-brownish on the breast, flanks and under-tail coverts. The most conspicuous feature was a long whitish supercilium that stretched from the bill to the rear ear coverts - perhaps slightly brighter in front of the eye, slightly duller behind. This was enhanced by a dark eye-stripe that encompassed the lores and broadened behind the eye. An inconspicuous whitish eye arc is visible in photos, but not apparent to me in the field. The bill was thin, sharp, and showed some yellow at the base of the lower mandible. The legs were palish - a rather nondescript dull washed out pinkishA sharp or hard "chek" call note was given occasionally, especially when the bird flew to cover. It often foraged on the ground or slowly worked its way up a weedy stalk and preferred low weedy scrubby habitat.