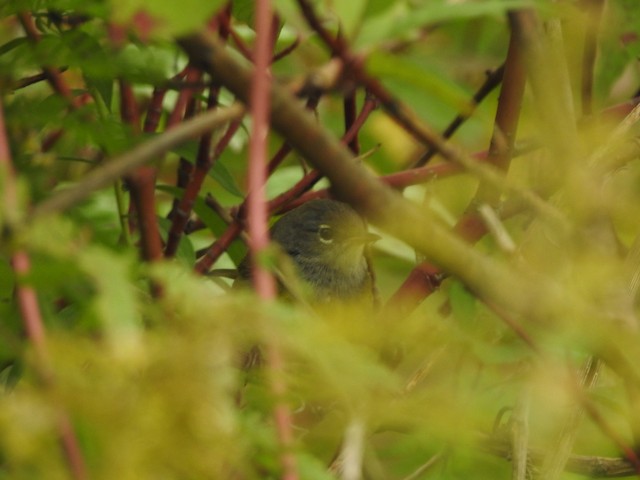 Alerted to by some nice chunky chip calls. I assumed I was going to find a Yellowthroat. My first glimpse of the bird was of it's rear (tail up) - an intense yellow that seemed too vibrant for a Yellowthroat. As it moved through a bush, I also realized it was too large to be a Yellowthroat. I slowly got closer and waited patiently for it to show itself, camera at the ready. Luckily it was still calling and was easy to keep track of it's location. I managed one photo burst before it went further in. Seeing a broken eyering on a nice blue-gray head, I ruled out Connecticut and left satisfied that I'd seen a Mourning Warbler. Only at home while reviewing my photos for the day, did I notice something was off about it's eye-ring. It's 'eye-arcs' are short, surrounding less than 50% of the circumference of it's eye, with it's top arc significantly shorter. It's eye-arcs are also relatively thick, when compared to most Mournings. Photos also show white on the throat with a complete breast band, which may help eliminate immature Mourning (typically showing yellow throat and broken band), though I am less confident on this detail as there seems to be some variation in this feature between the two species. Located near Goldfish Pond in Tommy Thompson Park, initially seen from the Spine Road by the enterence to south-most path that wraps around the pond. It did, however, move further in and towards the pond proper.