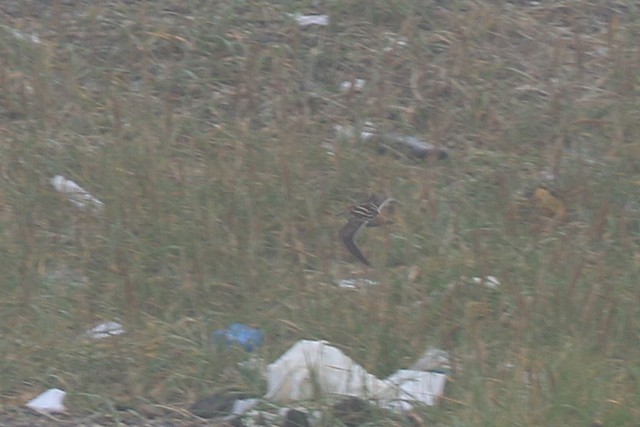 Alycia and I spotted this bird squatting down on the far shore trying to look inconspicuous. The face and breast were washed buffy but everything else that we could see about the bird looked like a Wilson's or Common Snipe. We drove around to the far side to get some photos and see which Snipe it was. Of course the bird flushed before we could refind it. In flight we noted what appeared to be mostly white underwings and an obvious bold white trailing edge to the secondaries on the upper wing. The bird landed near in the southwest corner so we drove over there. Once there the bird flushed again and went back to the south shore of the pond. We saw it land and move on the shore into the vegetation. When we got there the bird was gone. It actually had run over to the other side of the water and flushed out of that area to fly up and out of the pond and over towards town. In flight each time, we noted what appeared to be bright white underwing and a prominent white trailing edge to the wing. The bird called once when it flushed. I have multiple photos but all are poor quality due to the fog and overcast conditions. The photos support what was noted in the field.