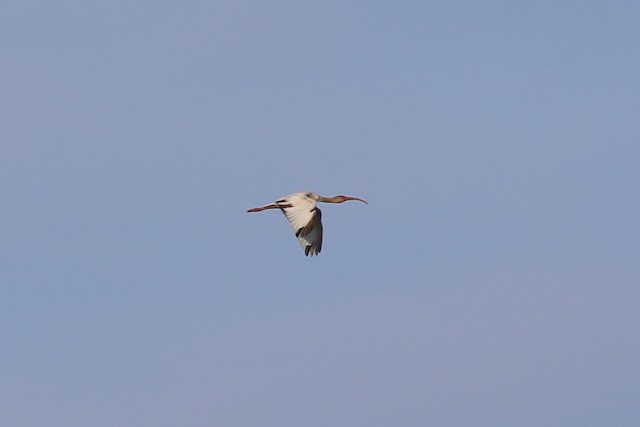 Final view. With flock of crows.

**(re?)found by Tim and David Swain. When I arrived Tim, David, and Jason had a scope set up at a very narrow viewpoint through the trees where they were waiting for the Ibis to put its head up from feeding behind the vegetation in the marsh. I took up that position and kept my eyes on it for a good while before Lauren, Brian (at a different angle), and the rest of the group saw the bird flying from the left of my scope, I saw it briefly pass through my scope view before it landed on the opposite bank of the river right in view. All of us watched it and snapped photos as it walked among the reeds. Eventually it walked barely out of sight again before taking flight and flying a good distance away, around the south side of Heard Pond (roughly here 42.349500,-71.383295). Max was just arriving and Tim, David, and Jason were leaving, so I went to go find Max. At some point in time when none of this group were looking, Lauren and Brian saw the bird take flight again and fly left this time, disappearing behind the trees. We didn't realize this until later due to the two groups being separated. Upon gaining this information, Max and I decided to start heading out to possibly find a different angle, closer to where Lauren said it had flown to, but we were called back shortly after by Lauren when her and Brian saw the bird flying by again! But again Max was too late and he had to get going, so we started walking back to the parking lot once more. As we were walking back, however the bird flew over the field amongst a large flock of crows, it was headed South/Southeast and seemed to land somewhere below the treeline roughly here: 42.348360,-71.373989 and Max was finally able to get a view. The white bird stood out among the crows by color and by its unique wing-beats. I snapped some photos of it flying overhead in decent light. A great end to a very hectic chase. I believe this is a first summer bird. This individual shows grayish brown streaking on its head which doesn't appear to be staining. Some wing feathers are also brown, including P10-P7 (P7 may be black?), a few of the first and last secondaries, and some of the coverts (and/or other feathers near the coverts. photos aren't great). Heath, J. A., Frederick, P. C., Kushlan, J. A., & Bildstein, K. L. (2020, March 4). Appearance - White Ibis. Birds of the World. https://birdsoftheworld.org/bow/species/whiibi/cur/appearance. (Edit regarding other sightings of nearly certainly the same individual:) The plumage of this individual apparently closely matches that of the bird seen in Sonora, Nova Scotia from August 2nd of this year (https://ebird.org/checklist/S92714785). It also appears to exactly match the plumage of the WHIB seen flying over Oak Top in Dighton, MA (https://ebird.org/checklist/S93410582) this morning (August 18th). It seems that the bird is (successfully) returning south, which I don't believe is common in many vagrants, although I'm unsure if this is more common in WHIB.