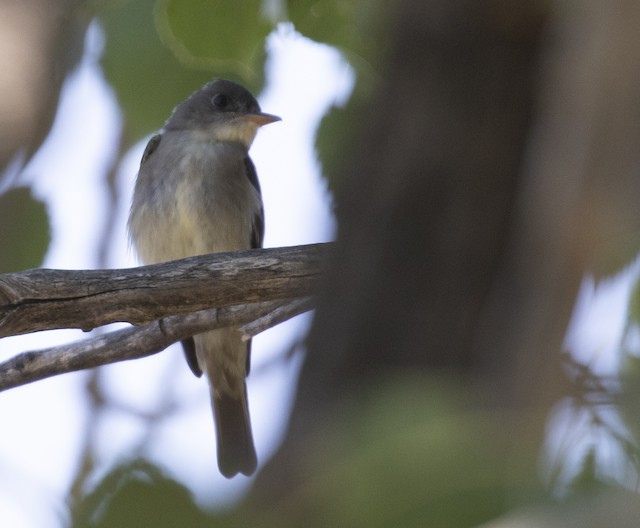 *very rare, 3rd state record. Singing and behaving as if on territory in the vicinity of 44.5204341, -104.0844485, moving between the two westernmost large trees, which were 20m or so separated from the main riparian corridor. While audible from the road if you have good ears, the bird was mostly on the backside (West, away from creek/road) of the northern of the two trees, which was thickly leafed out, so seeing it from the road would be challenging, though possible. I waded across the creek (about thigh high) to get closer. Fortunately, the bird is narrowly on public land, part of the sand creek access area managed by WY game and fish dept, if only barely. Pics, audio, and video of bird singing- will update with ID comments and documentation later today, can’t do it from the field. No playback used Visually, looked excellent for EAWP; almost entirely orange lower mandible; slightly more white around eye; lighter mantle color, more brown instead of gray, with a greenish tint I find typical of EAWP but not WEWP; much paler, more contrasting throat; much paler, more contrasting underbelly, and weaker vest; much brighter, better-defined white wingbars and secondary edgings, with perhaps darker wing panels than WEWP. All together giving it a relatively distinct "look" than WEWP. Also recorded a video of it singing, see fb post for that since I can't upload it here: https://www.facebook.com/groups/ABArare/posts/4358002047593738/?comment_id=4358021500925126¬if_id=1625773495551164¬if_t=group_comment&ref=notif. Giving classic tureee songs, relatively quietly so only faintly audible from road, and typical calls.