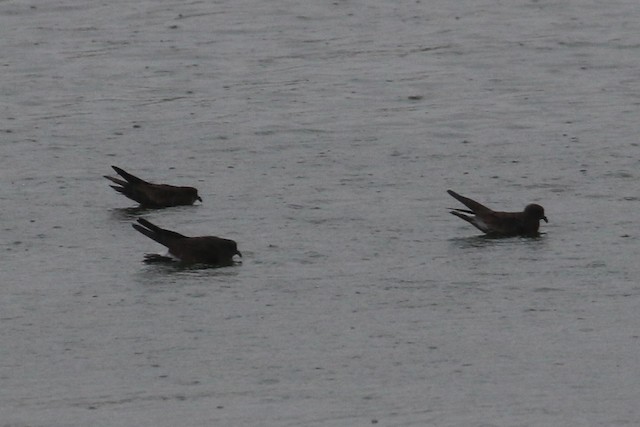 See checklist comments for situational details. At least four of storm-petrels showed significant white rumps and from my observations in the field and analysis of all the photos I so far scrutinized, they were all the same species. In the field, while observing & photographing the birds I & others were thinking we we dealing with one of the leach's-type (recently split - Leach's/Townsend's/Ainley's). Wedge-rumped Storm-Petrel was eventually mentioned and now the consensus of experts that have reviewed the photos is that these are Wedge-rumped Storm-Petrels. Also many of the other white-rumped storm-petrels found in the region this day, Patagonia Lake and various individuals observed/picked up around Tucson/Green Valley/Nogales? are Wedge-rumped. Details: In general - dark plumaged storm-petrel with significant white rump. Specifically - body plumage & coverts blackish with slight brownish tone, fairly distinct pale brownish bar on upper surface of wings (greater secondary coverts & inner primary covers), did not appear to reach the leading edge of wings, there appeared to be a matching pale bar on the underwing however lighting & viewing conditions made it impossible to tell for sure, most significant feature was the large white triangular rump patch (upper-tail coverts) which covered three-quarters or more of the tail but did not reach the notch in the tail as some references alluded to, at least the outer (lateral) under-tail coverts also appeared white or whitish, again conditions inhibited ability to determine whether white rapped all the way around the tail. Apparently these were small storm-petrels as there was little or no size difference between these individuals and the presumed Least Storm-Petrel.