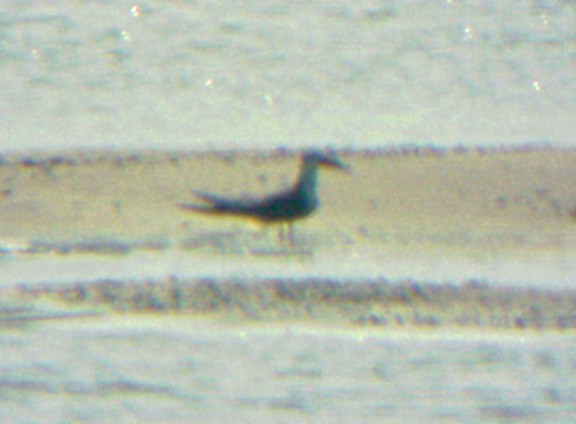 he first thing I did was call Mike Todd to get the bird posted on TN-Bird and then I called Kenny and LaDonna Nichols; they are doing a Big Year in Arkansas and I knew they might want to try for this bird. If it flew north, south or west, it would have to fly into Arkansas territory. Kenny did not hesitate and hit the road as I sat on the bird just in case it left; they were standing next to me at 5:00 PM. The bird got up and flew around quite a bit and entered Arkansas twice before they got there. We waited an hour and a half before it flew again.

I checked out the sandbar from Mud Island early Saturday and with the exception of a had full of Great Blues and a few Great Egrets there was not one other species to be seen, not even a Killdeer. I went by the pits and the full moon and wind had swept the greater part of the shorebirds south. A couple of hours spent scouting rice fields across the river in AR revealed that there is less rice this year and they have started some harvesting. Just hope we get some rain for the rails. I returned to scan the river again because the time is right for Sabine's Gulls and maybe another goodie or two but started to leave because there appeared to be zilch. One dark spot caught my eye and I saw a flash of orange on the bill so I though Caspian but had a problem with some "black saddlebags" the bird was wearing! An adult, male Black Skimmer was not on my most likely list for the day. I called Mike Todd to get it on the net and Kenny and LaDonna Nichols to see where they were. A Black Skimmer would look good on their AR BIG YEAR list. Kenny said they were on the way and I sat the bird till they arrived at 5:00. While watching the bird it got up and flew around a few times taking a drink and once picked something off the water. It got excited and was craning its neck a couple of times but I could see only dots in the sky. When 2 Osprey and an immature Bald Eagle hunted the area they did not phase the bird. I really wonder what excited this bird up high???? I took 3 poor photos from a mile away in bright sunlight and heat waves.