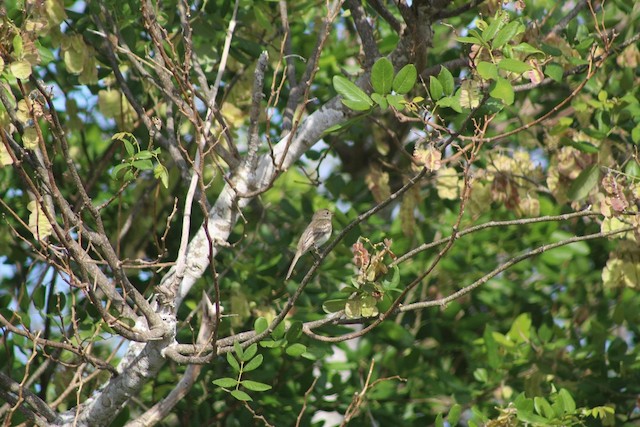 MEGA! I found this bird completely on accident while getting ready to head out into the field. While standing on my deck, I noticed a bird fly from the midstory of the hammock next to the house, into the gumbo next to the deck. At eye level, I watched the bird as it foraged in the canopy. My first impression was an empid, however I thought it was weird enough that I ran back inside and grabbed my camera. When I returned outside, the bird flew from the gumbo and perched on another tree about 15m from me, still at eye level. I was able to snap the 7 pictures I will attach to this checklist while it perched here, before it disappeared back into the hammock where it came from. The entire encounter lasted approximately two minutes. When it disappeared, I continued on with my day. It wasn’t until I returned home and checked my photos that I realized the bird was unusual, so I took the best photo and sent it to S. FL birders group chat, asking for ID help on the “empid” I found. Several members immediately identified the bird as an Elaenia sp. and recommended that I get audio of the bird for species identification. Unfortunately I spent the evening trying to relocate the bird, without success. The next morning a group of about 10 birders joined my search with the necessary documentation equipment, however our search was again unsuccessful. This bird identified as an Elaenia over an empid based on the round head, petite orange mandible, and inconspicuous white crown patch, slightly visible in one of the photos. At the moment the species of Elaenia is disputed, and will be left unidentified, unless sufficient evidence conclusively points toward a species. This bird is overall is very pale, with a slight yellow wash on the breast. Wing bars and the border to the primaries and secondaries are thin and indistinct. The mandible is almost entirely orange, with a small,dusky tip. This bird shows no facial pattern, and lacks any sort of eye ring. Unfortunately there were no vocalizations during the encounter, and none have been heard since. Suggestions for the species include Lesser, Caribbean, or White-crested. Please note that the location of this checklist is a general location, and not the exact location of the sighting. The bird was found on posted USFWS property, that is closed to the public. The location will not be shared publicly, however attempts to relocate the bird with continue by myself and other local birders.