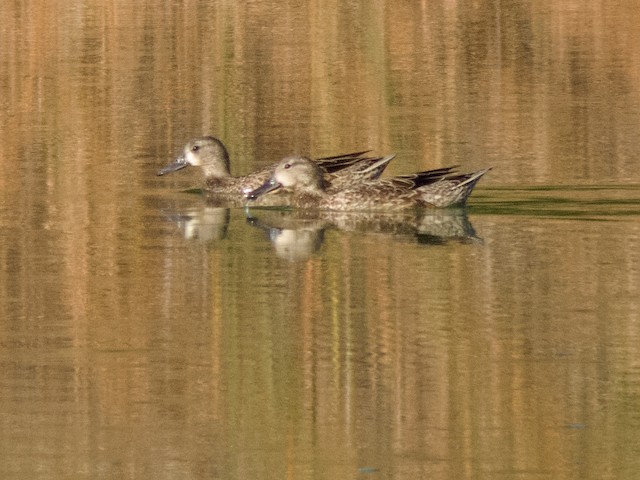 Notes from field: Bird on the left appears to be in eclipse plumage. Overall light brownish coloring, weak white crescent behind bill clearly showing on male. Largish dark bill. Smaller in size than nearby mallard. ID Discussion: Photos were posted and input solicited by email. Consensus of experienced birders is that the bird on the left is a Blue-winged Teal. Much discussion about the bird on the right as to whether Blue-winged or Cinnamon. Some comments below: For Cinnamon: The bird looks a bit more robust and with a more spatulate bill. Since male ducks have bigger bills than females, to me it suggests the front bird may in fact be a Cinnamon. At least I don’t think the “crescent-faced” bird can be a BW and this bird also be a BW, unless there is some photographic effect going on making the closer bird (in the 1st photo) appear bigger-billed than it really is. After examining 2nd photo: I am even more in the Cinnamon Teal camp on the righthand bird (in 2nd photo) now! I would think we have one of both species. I'd call the bird on the right a Cinnamon. Bill looks perfect. And young Cinnamons--if that's what it is--can show more of a face pattern than do adults, and thus look even more like Blue-wingeds. They can be pretty tough. For Blue-winged: I lean towards BwTe for that front bird because the color tone of the breast is exactly the same as that of the bird behind it (in 1st photo), the facial marking are of equal strength, and the pale feathers toward the bill are extensive and not confined in a spot (I hope I'm not imagining a plumage character state here that doesn't exist). Seeing the spatulateness of the bills is very difficult in these photos, and being certain of it in any situation is a challenge. It seems to me that the closest bird has too patterned a face for Cinnamon, with that darkish line back from the eye. It was my impression that Cinnamons do not have this, although of course they do have spatulate bills. I’m wondering if this bill just appears bigger because it’s closer? I think this is a BW Teal pair.