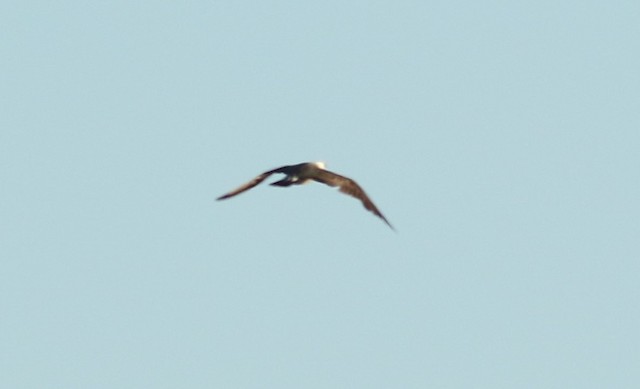 1st State Record. Initially found in Mass by Nicole Kirkos and Tyler Tomassone. First spotted by Joel Eckerson as it flew over us coming from the NE headed towards the Gull colony. Possible flight path being Quicksand Pond, Briggs Marsh, Long Pond, Round Pond? Also could have come from the harbor. Immediately stuck out as being a dark gull with white head, but with a lot of 2cy HERG in the area that were quite tricky with the lighting it took a brief moment of chaos before we all got on the bird and confirmed it as the HEEG. It briefly landed on the island directly under the "West Island" sign, where it took off joined the diverse flock of Terns and Gulls feeding on the water. The three of us kept losing it in the heat shimmer, but the distinct primary molt helped it stand out (as the gulls were lit from the side, so younger gulls had a darker look in the heat shimmer). After other birders arrived, the bird briefly landed on the island again for about 30sec - 1min. Unfortunately, as I was getting other birders on it, it took off and flew towards Sachuset Point NWR. Notably, the gull stayed low in the wave troughs making it hard to keep track of. Same bird as VA/SC/FL?