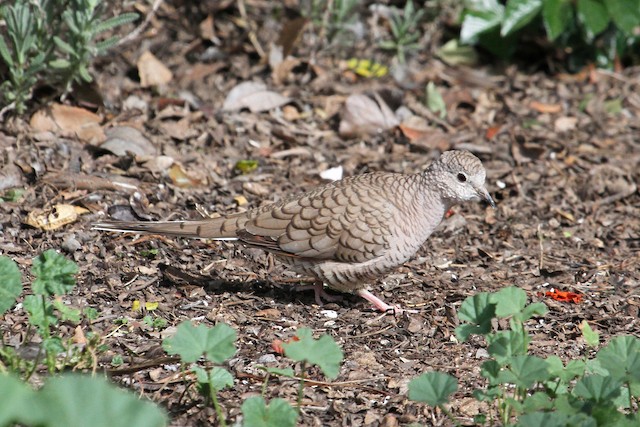 This dove was finally spotted perched in the mid-level branches of an acacia shrub around 09:20 and was well concealed. It's small size, scaled plumage, long tail and short bill instantly identified it as Inca Dove. It was approximately the length of a California Towhee. It sat still mostly looking around at all the sparrow activity. It was photographed for approx 20 minutes in the shrub by both Brad Schram and myself before it moved higher toward the top of the shrub and flew off into the neighbor's yard. After Brad left I observed the dove fly back into the yard at 10:10 and drop to the ground. It moved into the same corner of the yard below the shrubs. After some time it eventually walked out into the open on the ground toward the patio to feed on the seed. Total viewing time was approximately 35 minutes. It is my understanding the bird was only present the following day seen in the afternoon on 23 March, 2014, and was not seen again. It's skittish and wary behavior seemed to indicate it was probably a wild bird. This represents a first Santa Barbara County record. Identification: The upper body color was tan-brown and marked with curved dark brown feather edges giving it a scaled or scalloped appearance. The under parts were whitish on the face and neck to a light cream color on the breast and flanks. The under parts were also scaled but not as prominently as the upper parts of the bird except on the flanks. The head was small and through binoculars the eye was a dark red color. While perched in the shrub it stretched it's wings on a few occasions exposing the bright rusty wing panels. The long tapered tail when seen from below was mostly white, brown on the upper surface with a few large scales. The bill was short and slightly curved being biciolored- horn or pinkish at the base, and about 1/3 dusky at the tip. When seen in flight the outer edges of the long tail were white to the corners. The short legs and feet were a light pink color. It moved with a striding gate and bobbed it's head while walking. It was heard calling on a couple of occasions giving the two-part cooing call, "COO-coo", described as, "no hope". When calling the upper chest and neck feathers puff up as is often seen among doves and pigeons. Photographed: