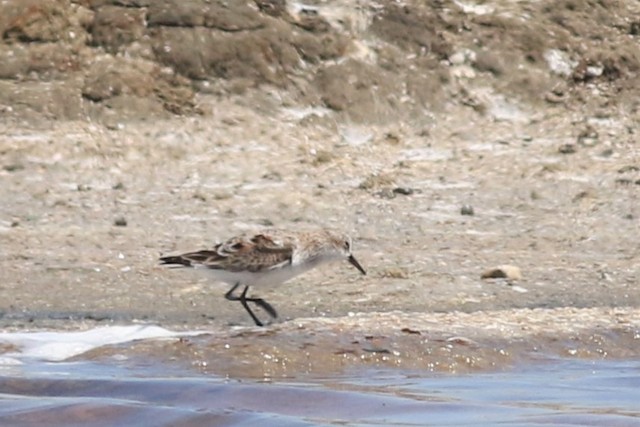 Reappeared on its favorite island in southwest pond 23 at the north end of 10th Street today. It is now well on its way into alternate plumage but is not showing very obvious orange in the face or breast yet (there are many Westerns that ARE showing very obvious orange in the face now). The split supercilium is evident and the breast band is more obvious now with the markings on the side confined to the upper breast, unlike the alternate Westerns showing markings well down the flanks. There is some rufous starting to show on the upperparts. Maybe most obvious are the lower/rear scapulars which are very broadly edged in white and might be one of the useful features to pick out at a distance. And of course it has the shortish/thin bill and lack of webbing between the toes (the latter feature probably hopeless from the bike path even with the best scope and conditions). The tide on the bay doesn't seem to matter. The bird was found right around the time the tide was bottoming out at negative-something on the bay. It was with maybe about five or six Westerns (and I think a Least also at some point). Preferred the west side of the island at the midpoint and was more ferocious than ever, spending 50% of its time battling with the Western to the north or the Western to the south of it. A Peregrine tore through at one point and the small group of peeps returned almost immediately despite there being plenty of mud exposed on the bay for them to flee to. Early morning is your best bet before heat distortion makes scoping impossible.