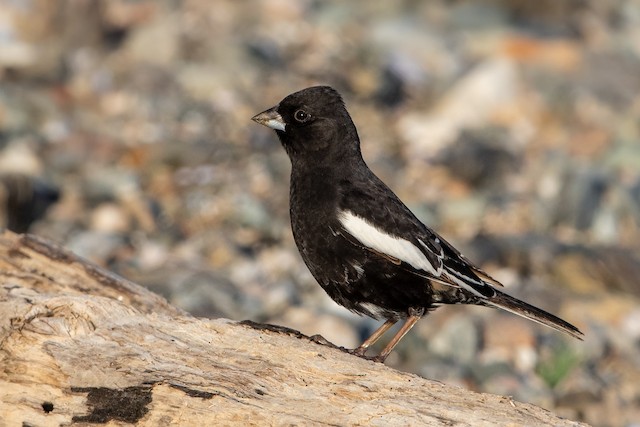 Found this morning by Edison Buenaño. When I arrived it was perched on a rock near the water as tide was low and ebbing. A stunning male. Medium large sparrow with thick conical bill (blackish maxilla and silvery grayish mandible). Almost entirely sooty black from head to tail with broad, bold white oblong patch on wing. Tips of secondaries white, outer margin of inner secondaries white. I could see broad white tips (corners) to underside of tail and some brown mottling in back/rump. Crissum dark with white-tipped feathers. Eye dark; legs pinkish-red to pinkish brown. Upon our return, the bird was chowing down on dandelion seeds, jumping up from the ground to grab erect heads and tugging them down. Very rare in spring to Maine where most records are for fall. Some spring records include: 28 May 2006 at Orono Bog, Bangor; 6 June 1983 on Machias Seal Island; 23 June 1983 on Monhegan Island; and 9-12 June 2009 at Kennebunk. There are no records 1984-2002, this peculiar hiatus apparent in New England as a whole, when one on Block I., Rhode Island, fall 1996 was said to be the first for this "formerly annual" vagrant in several years.