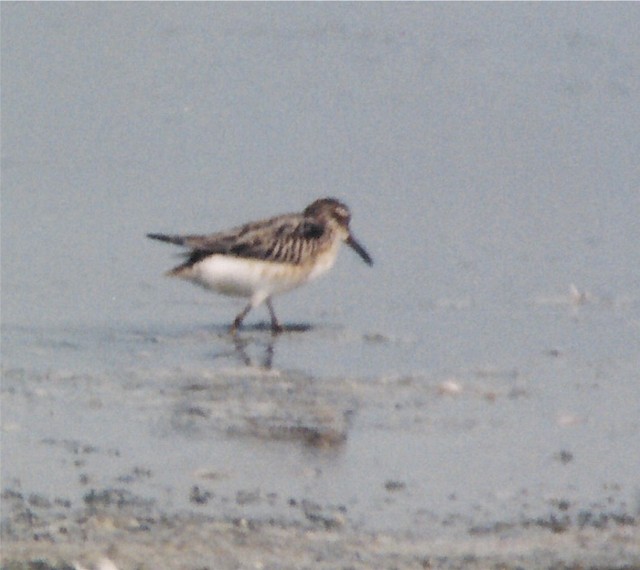 This photo shows: (a) a warm, buffy color in the flanks and up toward the breast; (b) a short tail; and (c) a sharp downward kink far out on the bill (see this also in others of these photos). The extensive buffy flank coloration, shown well in this photo with the wing slightly elevated, is evinced also in others of my photos, including its occurrence toward the front of the bird, at the front of the folded wing, and onto the sides of the breast. The extensive presence of buffy coloration combinated with clean, bright outlines on wing coverts strongly suggest that this is a juvenile. I will return to this matter in discussing photo ML30838311. Of course, wandering avian species very often are juveniles.

The distance from our location on the trail around West Pond (near Bench #12) to the Broad-billed Sandpiper's foraging area was approximately 125 feet, as a very rough estimate. For visual study of this bird my wife and I shared a Nikon Fieldscope ED78 with 30x eyepiece (used for both observation and photography; re. latter, see below) and we each had Zeiss 7x42 binoculars. To provide documentation of this stellar rarity I took many photos of the bird using a hand-held SLR camera to shoot through a scope. I am providing herewith a total of 6 images obtained via digiscoping. Five of those images are different shots of the bird, but the sixth is a high-cropped version of the photo that originally shows the Broad-billed Sandpiper in the same frame as two Semipalmated Sandpipers, but that, as cropped in this instance, shows it alone. This cropped version may provide a better view of the details of this rare sandpiper, in particular, of its dramatically marked dark crown with a bright split supercilium. I took these photos (and others not enclosed) by using a 35mm SLR camera (Canon EOS Elan II E with attached Canon Lens EF, 50mm, 1:1.8 II lens set at infinity) to photograph through the eyepiece of a Nikon Fieldscope ED78 with 30x eyepiece. Exposure was automatic (with some center-field weighting), and the film used was Kodak Gold MAX 400 film (for color prints). The attached photos plus a few others were included in my report on this bird to the New York State Avian Records committe (NYSARC), and three of those photos were included in the NYSARC 1998 annual report concerning the acceptance of this species. That source may be consulted for a brief summary of the presence of this rarity at Jamaica Bay Wildlife Refuge (JBWR).