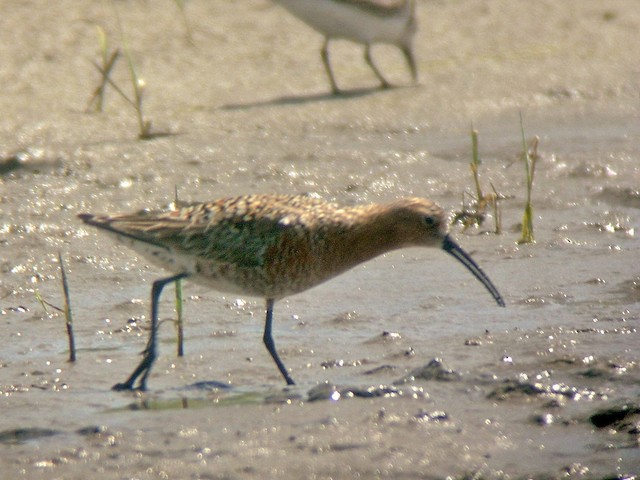 In this photo we see how the Curlew Sanpiper looked was it dashed away from the area where, in ML30522371, it was seen probing into the wet substrate. This photo was taken almost immediately after ML30522371. It shows the bird holding in its bill tip what probably are food items extracted in its immediately preceding probe into the substrate. It also shows the reddish, black,and white barring on its front underside and the long, smoothly curved bill, unlike the less uniformly curved bill of one of its relatives, the Dunlin (not shown in my photos). In this less than fully focused image the considerable white on the bird's underside could obsure the visibility of whitish tips on its greater coverts, so it is hard to discern the shape of those tips. Nonetheless, where apparently incoming feathers are close to the top side of the bird where there is better light (and no obscuring white background), broad white, round tips are visible. This remark is in reference to two very large greater coverts and to a scapular near the top rear of the grayish wing-covert area. The visible tips are in all of these cases broad, white, and rounded, providing further support for the suggestion that these are incoming basic-plumage coverts. Still, I would have liked much closer, better-lighted, pictures of this ares of seemingly incoming coverts, so I must regard the hypothesis of incoming basic coverts as suggestively, but not conclusively, supported by these photos.

The Curlew Sandpiper was seen on or near the shoreline of this small island, at a considerable distance from the viewing birders who wisely avoided efforts at overly close approach. By means of digiscoping, I obtained far more detailed photos than I could have had using my zoom telephoto lens (75-300mm) attached to my DSLR camera. For digiscoping I hand-held my DSLR camera with 50mm lens to the eyepiece of my spotting scope, which afforded me some very close-up images of the bird. The lens on the camera was set at infinity, and the scope was used for focusing.