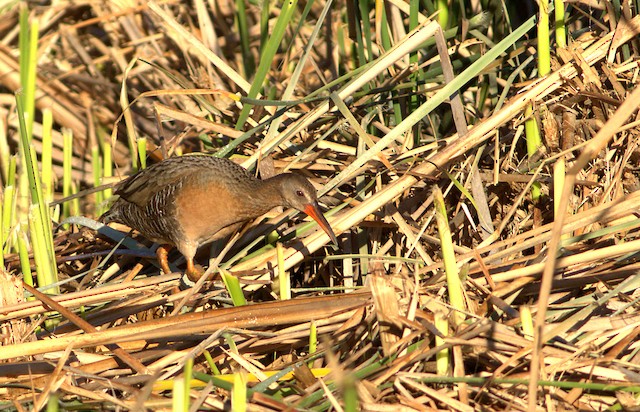 This Ridgway's Rail, photographed by Curtis A. Marantz on 19 June 2016, was presumably the same individual that had been present since first discovered this season by Jonathan Coffin on 18 March 2016 and reported two days layer by Don Sterba at the Ballona Freshwater Marsh, Playa Vista, Los Angeles County, California. This is presumably also the same individual that was reported by Jonathan 20 June 2015.

I stood around for almost an hour without ever hearing this bird call, but eventually I spotted the rail standing in the open in an area where the cattails and bulrushes had been trimmed. This bird then spent much of the next hour both standing in the open and walking along the edge of the cattails. Rather amazingly, given how vocal it was the previous afternoon, I heard only two bouts of calls by this bird today, which each bout including only three or four calls. The call that I heard was the same “tick, burrrr” that we had heard the previous afternoon. This was a conspicuously large rail, that despite being a little bit smaller than nearby Mallards, was almost the size of a coot and quite a bit larger than a Virginia Rail. Quite conspicuous on this bird was a relatively slim bill that tapered from a base of medium-depth to a blunt tip along a culmen that was at most very slightly decurved. I did not specifically note the length of the bill relative to field-marks on the face, but I thought this bird's bill was at least one-and-a-half and possibly two times as long as the head was wide. The forehead was gently sloping and inconspicuous, and the crown was weakly rounded if not somewhat flattened on a head that seemed small relative to the bird's size. This bird had a long and relatively conspicuous neck for a rail, yet it was quite a bit stouter and considerably shorter than I would've expected from a shorebird or heron. The body was plump and seemingly more pot-bellied than full-chested. I thought the posture when this bird was standing quietly was not quite as upright as diagonal, but when it called it stood quite upright and with the neck stretched upward. I thought the wings were of medium-length, but I failed to notice the primary projection or even the placement of the wingtips relative to the tail. I did notice that the tail was relatively short, though I think it may have extended beyond the wingtips, and it also seemed to taper to a broadly pointed tip. The legs were relatively long and seemingly stouter than those of a shorebird of comparable size. This was a relatively boldly marked and brightly colored rail, but I did not study it quite carefully enough to note all of the finer details of its plumage patterns. The forehead and crown appeared to be dark brown, and the face was at least this dark, if not darker. I do not think there was a bold supercilium, but there may have been at least some indication of a paler band between the face and the crown. The back, scapulars, and rump appeared to be a Buffy-brown color, possibly with a faint olive cast, and with each feather having a dark stripe running down the center. This produced a pattern of relatively bold striping on a generally relatively pale back. When this bird spread its wings, it revealed wing coverts that were a brighter and more rufescent color and with little or no pattern evident. The remiges, however, were a darker and colder shade of brown, but they did not appear to be boldly marked, though I could have missed a more subtle contrast between darker centers and paler fringes to the feathers. I did not see the tail very well, but it appeared to be similar in color and pattern to the remiges. I thought this bird's breast and sides were a relatively deep, rufous color, though possibly tending towards orange. I did not think the breast and sides were boldly marked, but I could have missed a subtle pattern. The flanks and at least some of the belly had a relatively conspicuous pattern of barring that appeared to combine relatively narrow bars of light gray to whitish on a slate-gray background. It is quite possible that the lower belly was paler and less boldly marked, and I cannot now recall noting the undertail coverts or the underside of the tail. This bird had a mostly red bill on which the culmen appeared to be dark. I thought the eyes were dark and the legs a dull, coral-red with a pinkish cast.