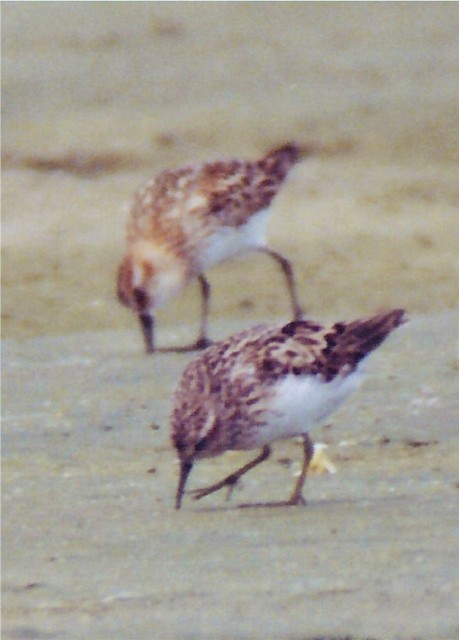 This photo was digiscoped through a 45-degree offset (angled) 80mm Swarovski spotting scope with a 20-60X zoom eyepiece (kindly loaned to me by one of the birders on-site that day). It shows the Little Stint (bird at top) in the presence of Least Sandpiper, a species that often foraged on the same relatively dry substrate favored by the Little Stint. This photo shows a number of features characteristic of Little Stint: extraordinarily long legs; warm, reddish color on head and elsewhere, including scapular fringes and some of the tertials; and many remnant breeding-plumage dark-centered wing coverts and scapulars.

I am providing herewith six photos that document the presence of Little Stint on this occasion. All of these photos were taken via digiscoping. In each case this involved hand-holding a film SLR camera to the eyepiece of a spotting scope in order to get photos showing enough detail of this bird to be useful in decisive identification. One of the six photos herewith was taken through my own scope and the other five through a different scope that one of the other birders kindly allowed me to use. It was a far better scope for this particular purpose than my own, largely because the angled eyepiece helped to support and stabilize the camera, plus it allowed zoom as needed for particular distances. Full details of this birding experience were provided by me in an article entitled "Little Stint (Calidris minuta) near Pike's Beach, Westhampton Dunes, Suffolk County, NY" in "The Kingbird" (Dec. 2000, Vol 50, No.4, pp. 344-357; publication of Federation of New York State Bird Clubs, Inc.). A photo-inclusive, detailed report of this record was accepted by the New York State Avian Records Committee. During its foraging the Little Stint favored areas littered with seaweed and horshoe crab shells and, more generally, relatively higher, dryer areas of the shore. In such areas it frequently found itself in the presence of Least Sandpipers and, occasionally, Semipalmated Sandpipers. The Little Stint featured in this report evinced behavioral characteristics typical of that species, namely, being very energetic and almost always on the move (on long legs that helped it move very fast); and a tendency to be aggressive toward many of the birds entering its presumed feeding territory. It often would confront them with a crouched, head-down posture, obviously intended as a threat, and if that did not work, it would charge rapidly in their direction in such an attitude. This individual also proved itself brave (and accommodating, from our perspective), for it did not fly in response to the low over-flight of more than one plane and a helicopter (separate incidents), circumstances to which many of the other shorebirds in the area took flight. It seemed a self-confident, bold, and very energetic creature.