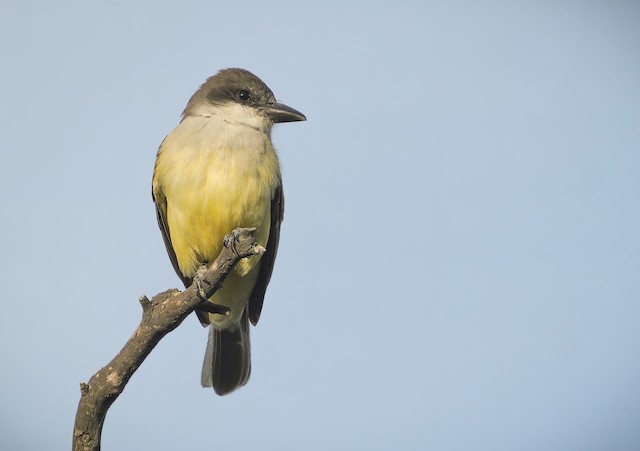 Continuing bird seen flycatching and vocalizing mostly in and around the eucs surrounding shelter 10. The bird was also seen on some of the dead snags just across the small road that heads up from Salt Creek Trail. Loud and distinctive call vocalizations made this bird easy to locate. This bird appeared to be a Very skilled hunter, as it was seen eating many Insects, mostly bees. This was an overall very large flycatcher somewhat similar to our expected Tyrannus species. The bird featured a dark gray cap, a very thick black eye-line, starkly contrasting white chin, and, as the name suggests, very heavy and thick bill. The upper breast was mostly white, fading to a light yellow by the upper breast, and brighter yellow by the belly and flanks. The back and tail was an overall medium brown color, with flight feathers showing lighter brown edging. In-flight, it could be seen that the underwing and undertail were a similar but slightly lighter yellow than that of the belly. For the majority of my observation, this bird gave fairly sporadic and infrequent scratchy “tswee-errr!” vocalizations. These vocalizations were often preceded by flight. However, closer to dusk, there was a approximately 3-5 minute period where bird vocalized much more frequently before going silent and assumedly roosting.