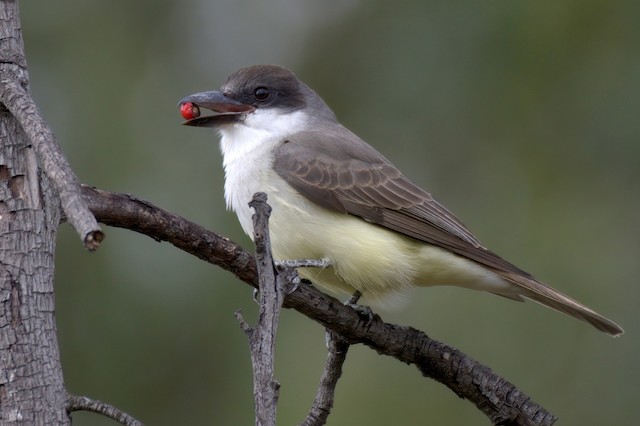 First spotted at 8:48 a.m. flying into its favorite tree, south of dog park. It called as it flew in. After a few minutes it flew far off toward the N-NW. I attempted to follow, walking along the horse paths, but to no avail. After returning to the parking lot I decided to give it one more go. Refound on the horse trail at 9:34 a.m. and managed to stay with it as it moved from tree to tree (seven of them) until it was back in its favorite tree S of the dog park around 10:46 a.m. I left shortly after, but when packing up in the parking lot I noticed it fly off S-SE around 11:00 a.m. The bird was calling through much of the last hour of observation. It made several successful attempts at eating insects (what seemed to primarily be bees) and two berries. Beyond the normal physical description, one thing discerned from photographs that wasn't immediately observable in the field was that the bird occasionally showed a narrow lock of its yellow crown (see second photo).