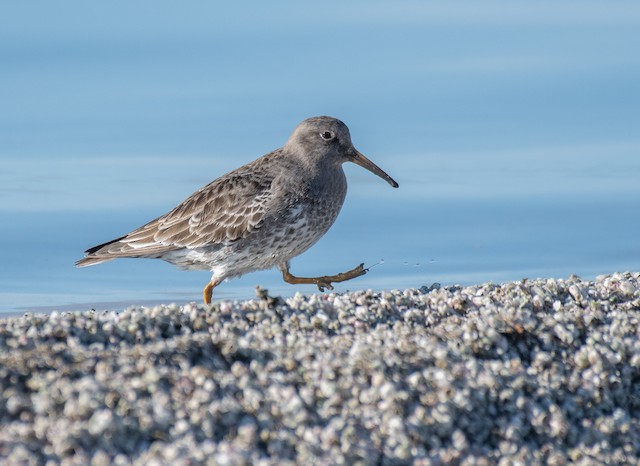 Continuing apparent Purple Sandpiper. I walked a ways south of Desert Beach Dr. and walked north so that the light was always to our back. Once we reached about opposite the marina (33.5185244, -115.9393664), I spotted it about 100-150m along the shore north from there. We slowly over the next 15 minutes worked our way to as close as we could, but the bird was still fairly distant due to the salton sea mud preventing us from getting closer. At 8:53, the bird flushed north and I was able to follow it with my binoculars and see approximately where it landed. We walked another 200m or so north to (33.5202817, -115.9440435) and the bird was sitting and preening on a small peninsula of barnacle skeletons. This area of the sea had far less mud, and I was able to approach within 15m of the bird for far better views. It was very tame, as were the surrounding Least Sandpipers. It stayed in view for over an hour, flushing to the north again around 9:56. I unfortunately was scanning the ducks offshore at the time, and only noticed it flushed while it was midflight and I lost it while it flew away and couldn't relocate. My mom had walked back to the car to retrieve her camera at this point, so I decided to just call it quits after viewing the bird for over two hours. As for the identification of Purple Sandpiper vs Rock Sandpiper, I am perhaps the least qualified person to make this call as this is the first time I have seen any individual of either species (having painfully dipped on the previous PUSA at the sea). Features discussed at length by others include leg color (though I feel that this isn't an especially useful mark), inner wing pattern (narrow white stripe), and facial pattern (isolated supraloral spot--interesting, potentially useful mark). As Matt Grube et al noted, the bird seemed to respond to Purple Sandpiper calls. Both times I played PUSA, it immediately stopped foraging and briefly looked around. I thought I may have heard it call once when it flushed the second time, a low perhaps rising "pip"/"kip" call but with my limited experience and the constant chattering/random calls of the abundant Least Sandpipers around, I cannot be sure that it was the Purple I heard. Unfortunately, I somehow managed to miss every time it spread its wings for photos so I don't have any more wing photos to add to the mix.