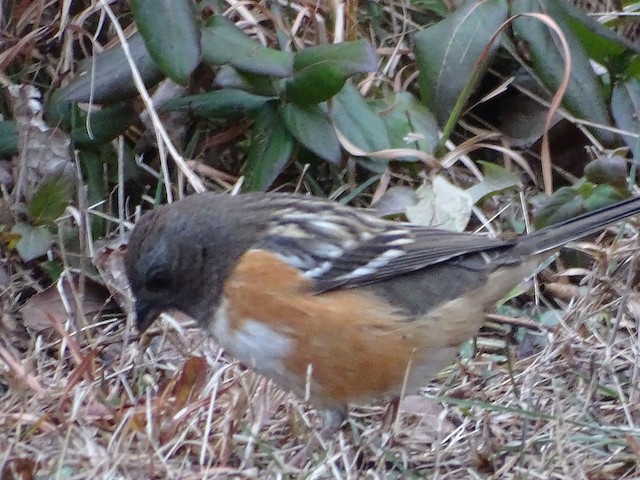 Continuing bird that was first found on Jan. 2 by Shai Mitra and Patricia Lindsay as part of the Christmas Bird Count. Searched for two and a half hours and finally saw the bird at about 4 pm. At about 3:45 I was alone, about midway down the paved trail/bike path (maybe 200 yards from the end at the parking lot with the big sand/salt pile.) I first heard a White-throated Sparrow in the bush next to a large clearing beside the path. I moved back to the far side of the path and stood very still for the next 15 minutes. After awhile, a Song Sparrow and two White-throated Sparrows dropped down and began feeding on the grass The sparrows were very skittish (there was a Cooper's Hawk hunting in the immediate area) so I hung back and remained extremely still. Right around 4 pm the Spotted Towhee came from the underbrush and landed on the edge of the grass and began feeding with the sparrows. It, too, was extremely skittish and returned to the bushes if I so much as took a step to the left or right. After a few minutes, several other birders came along and saw the towhee, as well. Head was a slate brown and not the chocolate brown of a female Eastern Towhee. Had a great deal of white spotting and streaking on back and scapulars plus white wing bars. Red eyes, black bill, rufous sides, white belly. Photos attached.