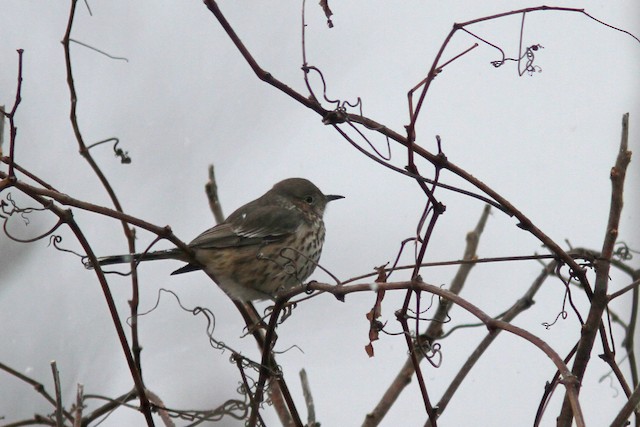 Mega rarity, found initially on the 13th by Theresa Gessing, she was unsure of the species ID but posted it to a bird ID site and reached out to a few birders for an ID. The bird was quickly determined to be a Sage Thrasher and the original observer was inundated with requests for specific details on the location of the bird and she then deleted her original post regarding the ID but others had already cross posted to multiple locations. She was very concerned for the birds well being if there were hordes of people descending on the area and the location was on private farmland with an unmaintained dirt road that is likely public but was unknown at the time. The original observer reached out to a few people in regards to the bird and the best course of action to take. We felt disclosing the location was up to her and she decided to err on the side of the well being of the bird and the question of access to non public land. She was fine with getting the word out locally but she did not want a 'circus' that would negatively impact the bird. Several local birders spent hours on the 14th trying to find the bird and it popped up only briefly a couple times with long periods of not being seen. It only would pop up when its favored feeding area was almost devoid of birders (always four or less) and no cars were present. There was intermittent snow throughout the morning but the weather did not seem to have as much of an impact as people did. The bird seemed to be feeding on berries during the time it was seen. I believe it was seen briefly the next day but only early when few people were present early on. The bird may have left the area completely or moved to a more secluded location away from people. A few items to keep in mind if one were to try to chase the bird (thanks to Ted for some of these suggestions): -All of the land at this location is private and actively farmed, so birding is from the road only to respect landowners and avoid conflicts. Large farm machinery is can be present on the roads. -In this case birding from the road will also give the bird spaces where there are no people, so it can feed normally. The bird seemed to be noticeably disturbed from feeding by even a few birders. Out of range vagrants, especially in winter/cold weather, are often very stressed. It would be best to stay at the location for only a short period of time. -If one sees a number of people already there, consider birding some other areas and coming back in a bit. (Also good for COVID-19 guidelines). -hunters use the area extensively so wear blaze orange -the roads in the area are farm roads (some private) and are not maintained (plowed) and can become quagmires if muddy. -parking is an issue even without snow so use common sense. Do not block roads by parking on them and do not hinder access for local landowners and/or road crews cleaning up after the storm. As far as the bird goes the identification was quite straightforward once the bird was eventually seen and photos obtained. A thrush like thrasher of the west that has only occurred in the state perhaps four times prior and never inland. Photos attached. Additional details at: http://quabbinbirdingandbeyond.blogspot.com/2020/12/sage-thrasher-in-hatfield.html Additional photos: https://www.flickr.com/photos/54277284@N05/albums/72157717323947771