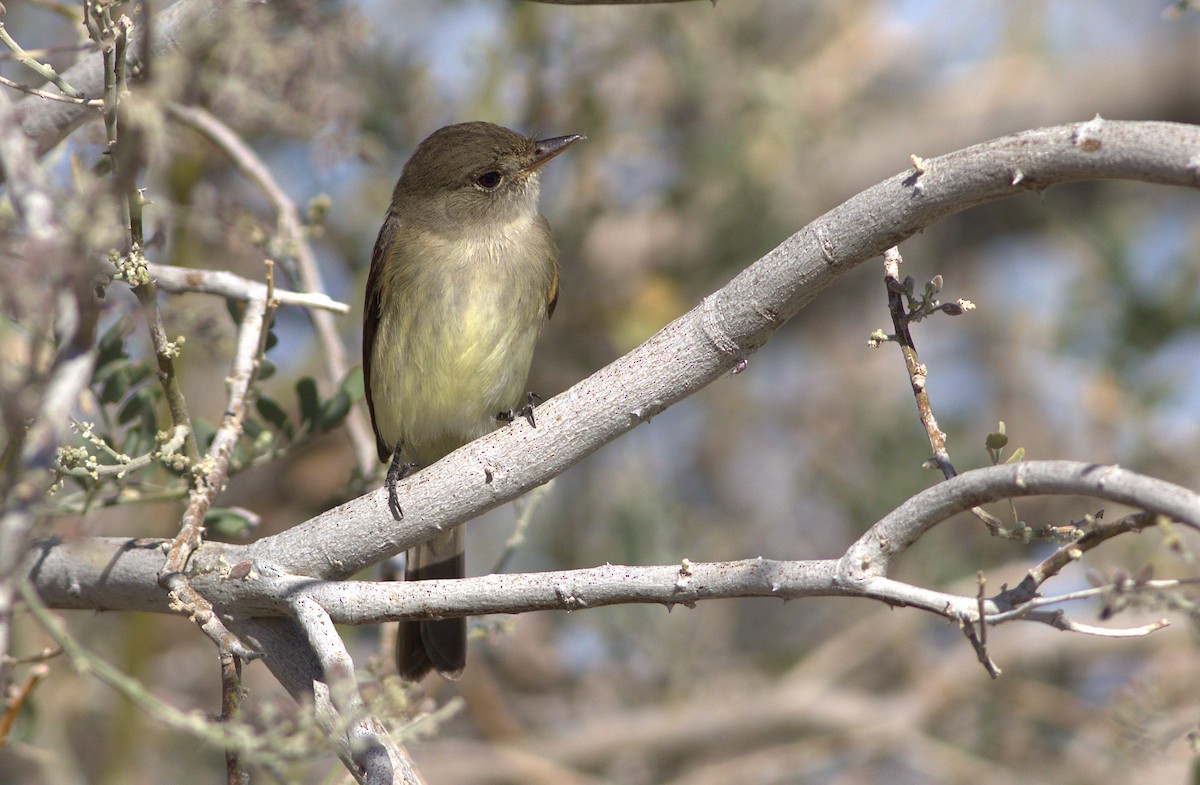 Curtis Marantz Media from this contributor

This early Willow Flycatcher was photographed by Curtis A. Marantz on 6 May 2016 at Desert Center, Riverside County, California. We identified this bird as a male based on the "fitz-bew" calls that it gave on several occasions.

Given the photos and the description below for the first bird by Louis, I did not write a description of this bird despite my studying it closely. I can however note that the bird at the fish ponds, which we saw foraging by sallying out from the tamarisk trees low over the water, was seen at moderate distance, yet clearly and Empidonax with brownish-olive upperparts, no apparent eyering but a weakly peaked head, and dull wingbars on wings that were darker than the upperparts. This bird also had a whitish throat and a cream-colored belly, but the breast was clouded a little darker. I was also at least moderately confident that I saw a pale lower-mandible on this bird, which despite being silent and not seen quite as well as the better-documented bird, appeared to be similar in its behavior, size, structure, and plumage patterns and coloration. One was along the oleander line at north edge and seen foraging, mostly below eye-level, into flowering Ironwood (Olneya tesota) on desert side. The other was foraging low along a line of tamarisk trees bordering the interior island of the eastern 'fish' pond. The first bird was giving a strong whit and gave a few snatches of 'fitz-bew' song (photos and recording of call). Both of these birds were large, heavy-billed Empidonax with short primary projection, dull wingbars, no or only faint very thin pale eyering, olive-brown upperparts, white chin and throat with pale yellowish underparts. The mandible was entirely pale, dull yellowish to orangish yellow. The underwing marginal coverts were brighter yellow and showed at the bend of the wing (seen on first bird). The legs were blackish; the irides were dark brown. First bird seen to capture a bee in the Ironwood.