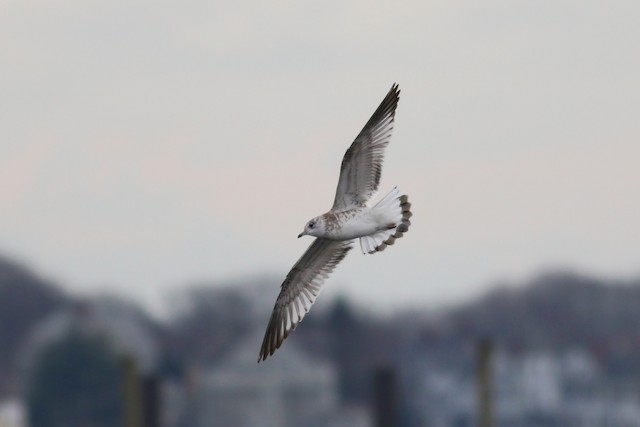 Flew from river straight into the beach area as I crossed the street after getting out of the car, landed in water near beach for a couple minutes close to six Herring Gulls, allowing me to run back to car to get camera. Flew off a couple minutes later, leisurely to the north, then came back and landed much further off the beach in the water, then lazily flew a few docks south where it dropped down to water and out of sight behind docks. Not seen again despite searching the area for the rest of the day. First cycle. Approximately the ninth state record of the Mew Gull complex and fifth of subspecies canus (not counting re-sights of individuals). This is the first of this age class of any form of Mew Gull in the state, the others having been adults or nearly so. A medium-sized gull superficially resembling RBGU, though no Ring-bills were present for direct comparison. Obviously small-billed with a small and round head, imparting an extremely delicate look. When spotted flying in, was struck by low-contrast upperwing pattern (compared to RBGU, which I was expecting it to be) and bright white uppertail that contrasted with black distal tail band. On the water, bill was noted to be two-toned with very dull base and black tip separated by z-shaped border (more black to lower mandible). Head and breast were white mottled by brown, especially on crown, hindneck and breast sides. Upperparts mostly brown juvenile plumage edged with white: lower scaps were very dark brown centered, median coverts with medium brown centers that were only subtly pointed, and greater coverts gray-brown creating only a small and low-contrast wing panel. Tertials with smooth very dark brown/blackish that were broadly edged in white; no coarse tertial markings were noted. Some smooth medium gray first-winter scaps were present, creating a hint of a gray saddle on the otherwise brown and white upperparts. Wingtips blackish with p10 shadow mirror (is this unusual?). In flight, underwing and underbody seen to be mostly white, with only sparse coarse brown underwing covert markings and a completely white belly and vent. Really cool bird. Having not seen a first cycle Common Gull in the US, I was unsure how obvious one would be in the field. However this being a rather classic example made it easier than anticipated. Such a small-headed and small-billed bird combined with a low contrast upperwing pattern and the simple black-and-white tail pattern added up to an obvious Common Gull in the field. Nothing tricky about this one.