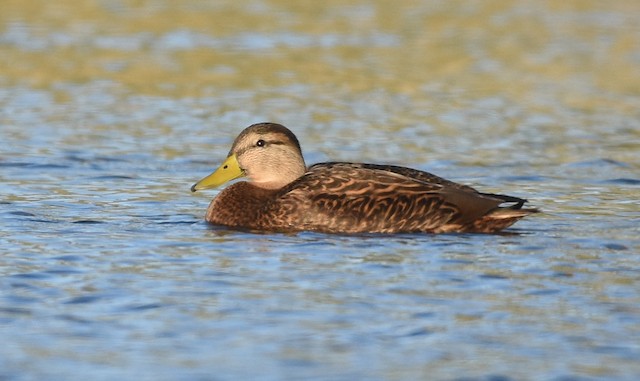 I initially thought this duck was a hybrid mallard/Mexican because of the green present on the crown and at least some curl to the central rectrices. Mexican duck identification can be difficult in the US due to the “background noise” of Mallard characteristics in Mexican ducks. This is due to periods of hybridization between New World mallards and New World monochromatic mallards. Based on the scoring system of Hubbard (1997) and Scott and Reynolds (1984), the only pure Mexican ducks, scoring 36 points, live at the southern range of Central Mexico. Given that there are very few “pure” Mexican ducks in Arizona based on this scale, it seems reasonable to count this individual as a Mexican because it looks very similar to our concept of what a “pure” Mexican duck is. This individual had a dark, sooty-brown body contrasting with pale-buffy coloration on face. The crown was dark, with some green coloration present in the right lighting. Bill was yellow-green, which differed slightly from the yellow bills of the adult mallards. The tertials and the tail were all brown.