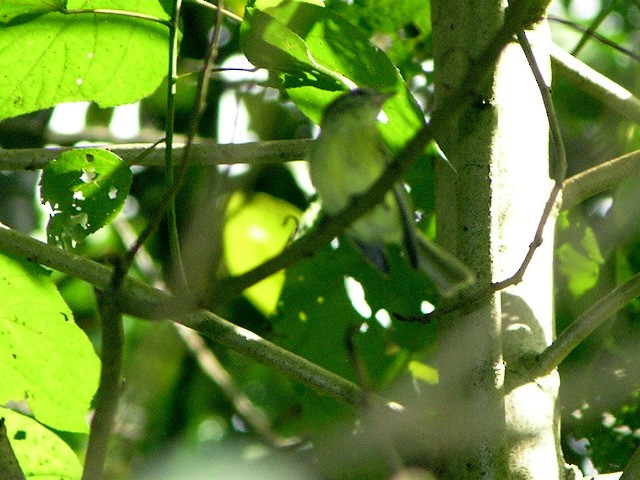 Unfortunately, no good camera was with us at the moment of the encounter with the species. I am also attaching part of the manuscript in preparation by myself and Mark Sokol: Single mixed-species feeding flocks were encountered both of which contained a single P. urichi. The appearance of both birds varied similarly, depending on the light. In the shade, the crown looked greyish, in contrast to a brownish or even dark brown back, but in direct sunlight the crown seemed concolorous with a pale olive back. The underparts always appeared pale yellow. The prominent wingbars are yellowish (the most diagnostic field mark). Also of note is a distinctive, if diffuse, supraloral and flesh-coloured lower mandible with a dark tip. Except for the bold wingbars, the species, with its weak contrast between head, mantle and wings, has the overall resemblance of some Dendroica warblers in winter plumage. Both birds were foraging, moving almost continuously whilst searching for insects in dead leaves, on live leaves and twigs and branches. When engaged in this, their tails were usually cocked; perched (horizontally) their wings tended to droop slightly. We found these aspects of comportment useful identification aids. Both were in the midstorey, 4–6 m above ground, with feeding flocks that remained more than 40 minutes in edge habitat with an open understorey and bordering shade coffee. In both flocks, urichi reacted strongly to (by approaching the observers) after playback of sclateri but paid little attention to the broadcast of the reiseri recording.