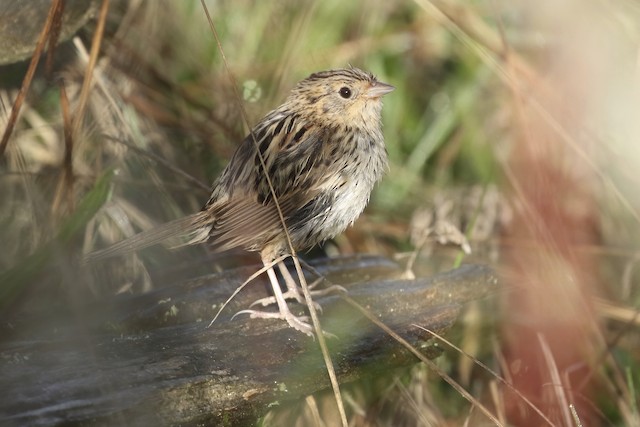 *Extremely rare on the coast I was walking up to the first patch of brush just before washroom out on the spit and began sifting through GCSPs and WCSPs on the ocean side. After a few minutes or so I decided to cut back to the main path through the trees. Out of the corner of my eye I caught a glimpse of a very small, round bodied, and long tailed sparrow flushing from in front of me, veering off to some rose hips towards the main path (9:00am). At first I assumed it was a Lincoln's but thought it was a bit odd for one to be out on the spit at this time of the year. I followed the direction in which the sparrow flew and found it sitting deep in the bushes. Lifting my bins up and immediately could see it wasn't a Lincoln's or Savannah Sparrow (diminutive size and structure, plain chest, yellowy face with grey cheeks, flattened head shape, bright tertial edging, etc). I quickly snapped off some photos and to my astonishment I realized it was a LeConte's Sparrow!!! :O The rest of the morning was spent trying to relocate this bird to get better photos. I kept walking a tight circuit around the same small patch and every so often it would flush from in front of me, only for it to dive back into cover. After about ~10 tries I was able to get proper views and photos. When Birders started arriving it came out on the the grassy open areas and fed for a bit, occasionally hopping out of sight into taller grasses. This bird was extremely skulky, staying low down in the dew covered shrubs/grasses, just before the washroom (W of the washroom, ocean side of the main path): (48°21'33.3"N 123°43'01.1"W) This bird vocalized a few times which aided in my ability to relocate it through the morning (the chip calls were similar to that of SAVSs and a quiet 'tseew' call was also heard) ***1st for Victoria (and for all of Vancouver Island?)