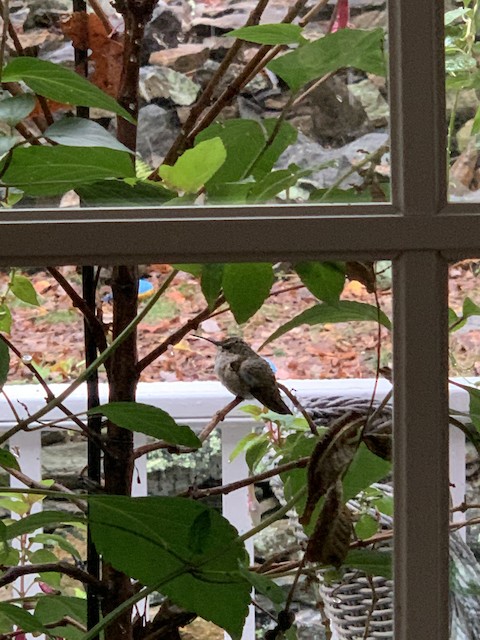 A female Rufous Hummingbird was sighted from 29-31 October 2020. I initially saw her drinking nectar from the flowers on the 29th and assumed it was a Ruby-Throated Hummingbird because that is only species that is typically seen in Massachusetts. She made several visits to the flowers throughput the day but she was too quick for me to photograph her on the 29th. The pictures I was finally able to take with my iPhone from inside the house were taken on 30 October while it happened to be snowing outside! On all three days, she was seen drinking nectar from what was left of my flowers on the deck and would occasionally perch for a few minutes on the branch of a salvia plant. I quickly took two feeders out of storage and made fresh nectar for her but she only wanted to drink nectar from the flowers ('black and blue' salvias, 'Vermillionaire' firecracker plant, and 'Wendy's Wish' Salvia-Sage). I never once saw her go to the feeders. I knew it was very unusual to see a hummingbird at the end of October so I submitted a checklist to document it. Marshall Iliff from Cornell contacted me on the 30th and came to visit on the 31st to take higher resolution photographs. From the photos he was able to confirm that it was an adult female (he could tell by the whitish throat with red in the center) and by looking at the pattern in the tail he was able to confirm it was a Rufous Hummingbird. I looked for her on the following days (31st and on) but did not see her. It appears she moved on in her migration.