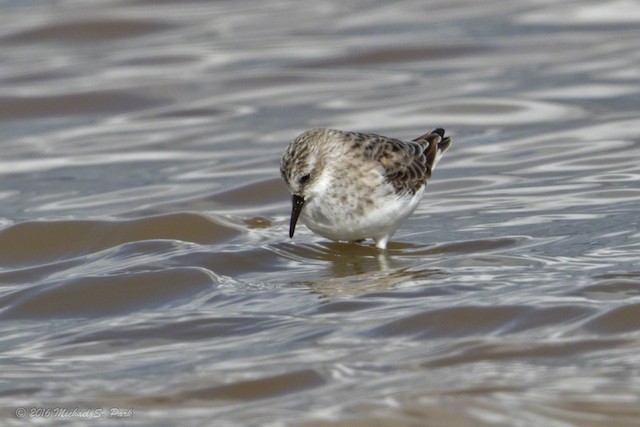 This peep was foraging, with a small group of Western Sandpiper and Dunlin, in the pond directly west of the railroad and east of the levee trail on the east margin of Pond A12. Its activity while feeding was restricted to square-meter sized patches of the most shallow areas near islands in the pond. It was, by mass and by length, smaller than Western Sandpiper. The upperside was ashy-brown and contrasted with the richer brown and rufous of the uppersides of adjacent Western Sandpiper. The edges of the tertials were imbued with reddish tones that contrasted with the brown centers of these feathers. The tips of two primaries extended beyond the longest tertials. Images that I reviewed of Semipalmated Sandpiper, showed that only one primary tip extends beyond the longest tertial. The underside was white except for spots that formed a collar at the top of the breast. This collar was broadest and the spots most pronounced near the sides. In the center, this collar thinned -- essentially interrupted, and the spots were faint. The bill was distinctly shorter than that of Western Sandpiper. It was not as broadly based and bluntly tipped as bills from Semipalmated Sandpiper of western populations. The bill had a slight downturn near the distal half. This wasn't apparent from all angles. The overall impression was that the top of the bill was more strongly angled to the tip than the bottom. The supercilium was forked near the supraloral, with the longer branch extending over the eye and then thinning near the auriculars, and the shorter branch directed slightly upward toward the crown. The legs were black. An image showed that the toes are free and without webbing.