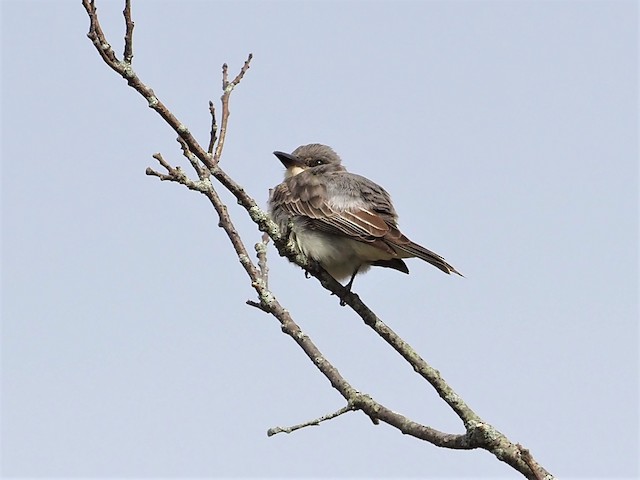 Perched at top of oak next to barn, not far from parking lot. Photos first taken (long distance) at 10:02 AM, last photos taken at 10:22 AM. The bird surprisingly allowed close approach. With the temperature in the mid-40's, it did not take any insects. Several minutes were spent preening. At 10:22 AM the bird abruptly took off and flew fairly high in a southerly direction over the field and tree line of Woodward Point peninsula, and out of sight. Likely, it exited the preserve. When the bird was first observed, from the rear at some distance, it was obvious it had the kingbird shape/color. Upon closer observation, noted large, thick, black bill (the upper mandible exhibited a small hook at the tip - see photos). Upperparts and head were gray, with a black shrike-like mask running through the eye. The wing tertials were brownish in color with pale fringes, as were the median and greater wing coverts. From the rear, the dark tail had pale fringing at the tip, but not the more extensive white tip as in the Eastern Kingbird. The tail did not always appear notched, but did so after preening (see next-to-last photo). Lastly, the underwing appeared pale in flight (see last photo), not darker as in Eastern Kingbird, and it was noted the undertail coverts had a yellowish wash (see 2nd photo, especially). No sound was heard from the bird.