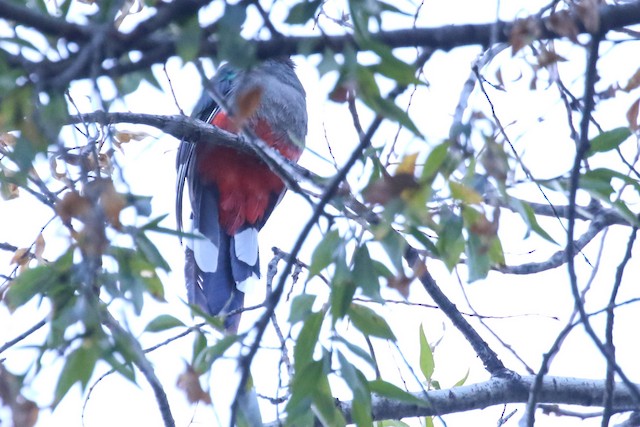 Found yesterday by Daniel Leifheit who was following up on a vague, un-detailed mention of one in the area on a local trail hiking app. 5 days earlier. The location is about 1.4 miles up the Little Cherry Creek Rd from Hwy 15, north of Silver City. Exact location (32.90004, -108.21744). At approximately 8:43am we heard one individual vocalizing upslope from us. The bird was giving its repetitive, high pitched, “squueeee-Chuck” call. Shortly thereafter Nick Pederson spotted it perched out in the open on a tall pine snag about 100 feet upslope. This gave a clear view of the bird’s peculiar body form; trogon-like with longer wings and neck, lankier body, shrunken head, and bulging rump. The bird quickly flew from its snag, giving a loud chuckle as it flew, and landed only 40 feet away in the top of a large narrow-leafed cottonwood. From below the bird sported an extensive scarlet belly and gray head and breast. Its short, small bill was apparent from this view despite not having a single photo that clearly shows her face. No ear tufts were observed but there was a lot of foliage in the way and she was moving almost constantly. The tail was long and tapering, becoming squared at the tip, but with rounded sides, making for a very unique tail shape, characteristic of quetzals. Looking at my photos the central tail feathers appeared to be quite worn and drab, while the outer rectrices were being replaced and were shorter than normal, fresh, showing an extensive white spot at the terminal end of each tail feather. The tail feathers lacked any of the light barring typical of Elegant Trogons, or Mountain Trogon for that matter. One of its outer tail tips on the bird’s left side was broken. What I could see of the bird’s wing coverts were iridescent forest green, and its rump with a bluish sheen. Bad photos attached, hopefully Bryan’s are better. Absolutely amazing! A bird I’ve hoped to see in NM since I was a kid. 2020, the year of the Quetzal! Matt Baumann and Megan Ruehmann heard another individual vocalizing further upcanyon at about the same time were were watching the female. The second bird wasn’t seen by the time I’d left around 11:30am.