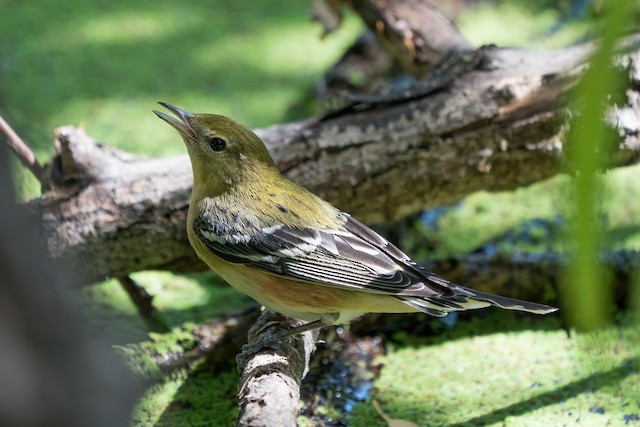 Continuing first county record. When I first arrived there was one other couple who hadn't seen the bird but said someone had seen it in the large oak tree right where paved path ends on the west side of the lake. They left and I waited a bit, and sure enough the bird popped into view and flew down low in front of me as it foraged. I grabbed some photos and then watched it as it moved back higher up. Just when a different couple arrived, the bird flew down into the reeds at the edge of the water and was easily seen moving around actively before it stopped and took a drink for a bit in the stagnant water, allowing great viewing opportunities and photos. Awesome sight! Seen here primarily around here (37.2455278, -121.9694732). Large warbler with greenish-yellow uppers, light streaking on crown and heavier on mantle, less pronounced dark eyeline than BLPW, two white wing-bars on dark wings, and chestnut on flanks. Dark legs/feet, and cinnamon/peach undertail coverts, and less streaking on breast also help separate it from similar BLPW. Bird appears to be molting r1-r6 on one side of its tail, as evidenced in photos.