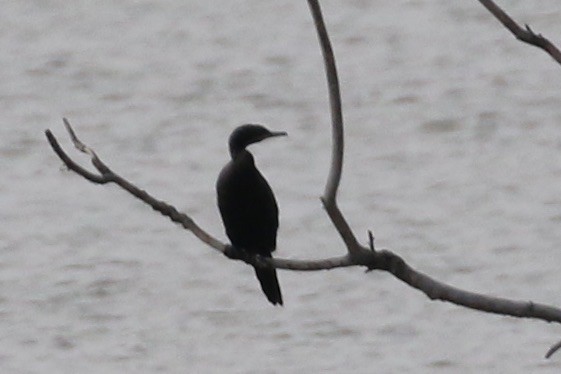 Initially scoped Hickory Island from Princess Point. I noted a small cormorant roosting on top of a log that was on the West side of the island. I then biked to the RBG and observed the same bird from the waterside trail. Again, the bird was noticeably smaller. The bill was thinner and not quite as long as the nearby DCCO's. Structurally, the head seemed blockier. There was a faint white line on the underside of the yellow chin. The bill was greyer than all of the nearby DCCO's. The yellow chin did extend to the upper side of the gape but the lores were dark. The tail seemed slightly longer than the DCCO's. The neck was a light brown neck and breast aging this bird as a hatch year NECO? After about 30 minutes of observing this bird it took off with ~100 DCCO's and flew behind the island and to the South side of the bay where a feeding frenzy was forming. While trying to refind the initial NECO flying out from the East side of the island I noted another small cormorant roosting in the Eastern most dead tree that has a lot of branches. This bird was similar in structure to the first, but had an all dark neck and more prominent white line behind and below the yellow gape + chin. I aged this one as an after hatch year bird based on the lack of bleached brown neck and breast (it was more uniformly dark).